Police seek arrest of yet another Trump supporter for bloody, violent assault on black activist 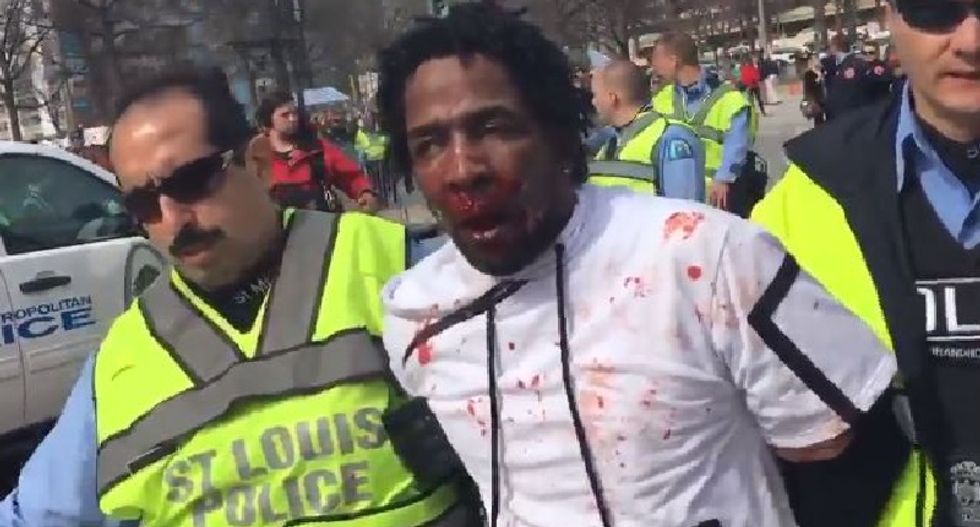 The man who became famous when his bloodied face gained national media attention outside a Donald Trump rally is speaking out -- and he says he was sucker-punched by a Trump supporter.

Anthony Cage, 50, a well-known local Ferguson activist and coordinator for the Urban League of Metropolitan St. Louis’ Save Our Sons program, told the St. Louis American that the suspect tapped him on the shoulder. When he turned around, he was sucker-punched in the face.

A warrant has been issued for the arrest of Shawn Morehead, the man suspected of attacking him. Morehead is a black Trump supporter, according to the American.

Cage was seen being led to an ambulance by St. Louis police, who initially believed he was the suspect. They then released him from custody after witnesses told them he was in fact the victim.

Cage says he plans to press charges -- and has some choice words for the GOP front runner.

“Trumpism must be stopped in its tracks,” Cage told the paper. “It’s 2016, not 1916. We just elected our first black president. How can we elect Trump, a man who preaches hatred?”

Cage told the American that he was protesting peacefully.

"At times we got loud and boisterous, but we voiced our displeasure peacefully,” Cage told the paper. “We were practicing our constitutional freedoms of speech and assembly."

In video from outside the weekend rally, Cage can be seen among demonstrators, speaking on a megaphone. Photos show him lying on his stomach, surrounded by police officers, with his face bloody.

Fortunately, Cage did not suffer any serious injuries. His nose was badly bruised but not broken, and his teeth were not chipped or broken.

“I was just standing still,” Cage told the American. “Somebody tapped me on the shoulder, and when I turned he sucker punched me. Of course, I tried to defend myself. We were on the ground when I was tackled by law enforcement.”

He said he was hit just after Trump said something at the rally that got his supporters excited.

"I have no doubt that if Trump is elected he will throw this country back 200 years," Cage said.

The Friday morning Trump rally at the Peabody Opera House was tense and at times violent -- as has become the norm at the real estate mogul's campaign events. Trump cancelled his rally in Chicago that night, sparking a night of unrest.

A rally in Kansas City on Saturday was similarly unruly. Video from outside the event shows police unleashing tear gas on demonstrators outside the event, while inside Trump was interrupted regularly.

One Trump supporter is already facing charges for sucker-punching a demonstrator and threatening to kill him at a chaotic North Carolina rally. Trump was also briefly investigated by local police on suspicion of inciting a riot at that event.