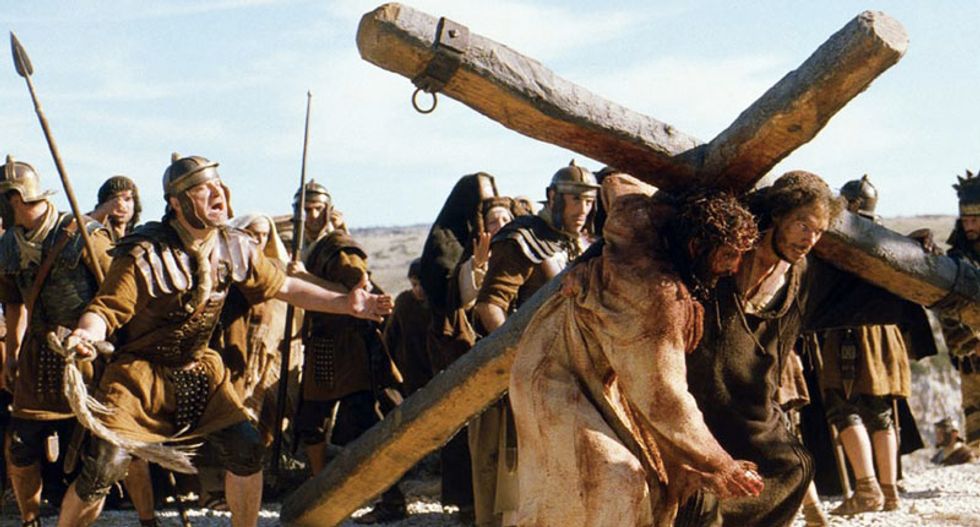 Scene from 'The Passion of the Christ' - 20th Century Fox

A Arkansas history teacher has been suspended after students complained that he forced them to watch Mel Gibson's graphic and violent 2004 film, The Passion of the Christ.

According to THV11, teacher Greg Hendrix made his students at Wilbur D. Mills High School in Little Rock watch the film as part of a class on "History since 1890," before having them take a quiz on the movie.

In a recording taken by a student, the teacher also complained about Democrats and liberals, bemoaning "political correctness."

Gibson's film was a box office blockbuster for the stridently Catholic director despite earning an R-rating for its extreme portrayal of the torture and crucifixion of Jesus Christ -- making over $600 million.

According to one student, she showed up expecting a history class only to find the film cued up for her class to watch.

“It was weird. He shouldn't have done it because there are a lot of students that have different religions. It just didn't feel right,” Kristina Coffman said  before adding that five students -- including herself -- walked out of the classroom as the film started

“They were like this doesn't feel right. They just didn't want to be in there,” she said.

"It's religious proselytization. It has nothing to do with the class, which is history since 1890," explained Rita Sklar, executive director of ACLU of Arkansas, adding that some students in Hendrix's class were bullied by other students after watching the film.

Sklar stated that teachers need to respect their religious rights of students in their classrooms while keeping their own religious views to themselves.

“Kids having the religious liberty in school means they can express their religious views. It doesn't mean the teacher can,” Sklar said.

“He said that that Liberals and Democrats were trying to violate their first amendment rights,” Sklar continued.

Hendrix has been suspended with pay pending an investigation by the school district, with some complaining parents holding their fire waiting to see what happens with Hendrix.

According to Sklar, the ACLU is considering filing an ethics complaint with the state.

Watch the video blow via THV11: