Jimmy Kimmel corners Trump on his Clinton flip-flops: ‘So, you were full of sh*t when you said that?’ 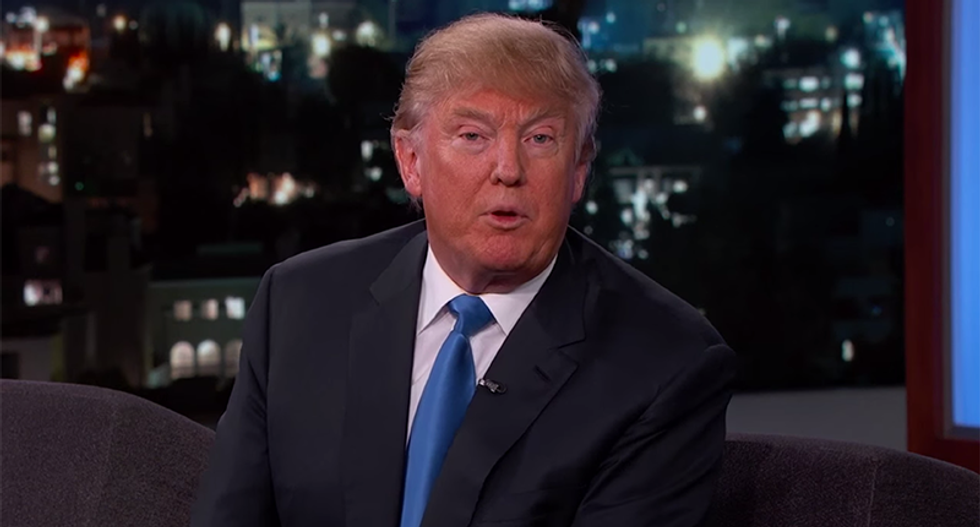 In one of the most bizarre interviews with Donald Trump, Jimmy Kimmel managed to be insulting, while Trump took it all with a smile on his face.

Kimmel began by asking if Trump thought the campaign would go on this long, or if he assumed it would be over after a few months. Trump said he gets that question a lot, but wouldn't acknowledge if he did or didn't expect to be the nominee. "You never know what's going to happen," he insisted.

Trump claimed that the GOP thought they would have to have two conventions, one in July and one in August, but since he has won by such huge margins, Trump said, he'll easily make it as a nominee. "I am now, here, and I'm watching Hillary [Clinton]. It was supposed to be the other way around. And I enjoy watching her."

Kimmel asked Trump if he enjoyed watching the Hillary/Bernie conflict play out. "Well I do," Trump admitted. "It's getting nasty. I had no idea it was going to be so nasty."

"And you hate that. You don't like that," Kimmel said in jest.

When it came to Trump's previous endorsement of Clinton in 2008, where he said "she would make an excellent president," Trump confessed that as a businessman he compliments everyone whether it's what he really thinks or not. "So, you were full of sh*t when you said that?" Kimmel asked. Trump nodded.

As for Trump's latest flub over recordings where he pretended to be a PR agent for himself, Trump seemed uncomfortable talking about it. He told Kimmel that the voice on the tape sounds nothing like him, echoing similar claims from his campaign. It was almost as if he refused to admit he got caught. Trump further explained that he uses fake names and fake identities all the time and has for years. One of his personal favorites even became the name of his son, Barron.

Kimmel asked Trump a softball question about his children and the family and Trump explained how proud he was of his children, their success and hoped they would go on to supersede him. He mentioned that he has "friends" who are "very successful" but apparently horrible parents. "They actually don't like seeing their son or daughter be better than them," he confessed. "Well, they're not very good fathers, and they're not very good parents." He did say, however, that if one of his own children ran against him for president he would crush them.

After the Kimmel taping, Trump had a fundraiser for the Republican party and for his own campaign scheduled. Trump explained that the attendees would be "very rich people" and "very successful people," but unexpectedly, he claimed, there would also be "in many cases very liberal people." He came up short when it was time to name names, however.

Kimmel wanted to know about celebrities endorsing him who weren't ready to be public about it, but Trump named off celebrities that were already public. "I’ve had great endorsements," he name-dropped. "Well, Mike Tyson endorsed me," was his example.

Since Bernie Sanders will be appearing on Kimmel's show Thursday night, Kimmel had Sanders send along a question he'd ask Trump. Sanders wanted to know if Trump would debate him, since Clinton has refused to participate in the Fox News debate. Trump said he would if he was paid to do it. "If I debated him, we would have such high ratings. And I think, I should give, I should take that money and find some worthy charity," Trump explained. Perhaps, one like the veterans charity. Trump asserted that candidates should get paid for the ratings they generate on the networks. He, in particular, who has helped make tons of money for the networks.

It didn't take long for Bernie Sanders to respond. The campaign tweeted in real time: "Game on."

Game on. I look forward to debating Donald Trump in California before the June 7 primary.
— Bernie Sanders (@Bernie Sanders)1464237049.0

Kimmel asked Trump where his self-esteem comes from, noting the high opinion Trump has of himself to demand he be paid by the media for running for a public service position. He explained he's always been comfortable in his own skin.

“Have you ever been to a psychologist?” Kimmel asked.

“Nah, I never have the time! You know what they say: Keep yourself busy and you’ll never need it," Trump said. He didn't clarify who "they" are.

The interview closed with Kimmel reading his latest children's book about being a "winner." It features Trump beating up on everyone and being insulting. Trump smiled through the insults from Kimmel as if he didn't even realize Kimmel was making them.