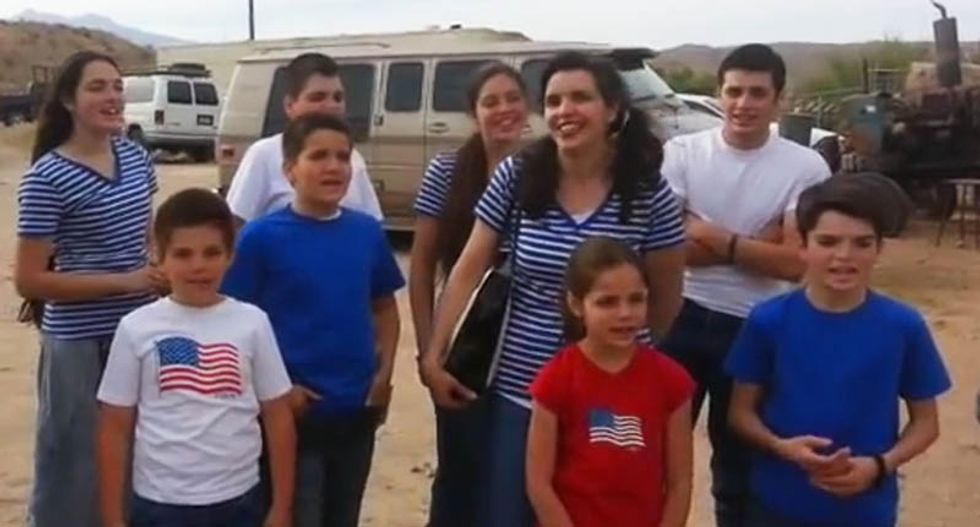 A Kansas woman who took her children to sing at the armed occupation of an Oregon wildlife refuge was arrested for assaulting a police officer who was serving an eviction notice.

Odalis Sharp was booked into jail Friday night after police accused her of interfering with a law enforcement officer and battery of an officer, reported the Kansas City Star.

No charges had been filed Tuesday morning, the newspaper reported, and Sharp was released Saturday morning on $3,000 bail.

The 46-year-old Sharp attended a court hearing April 26 on an eviction case filed last year by her landlord, and a court ordered her to move out of the property in September.

She appealed the ruling, and the court ordered Sharp to post a monthly $1,500 cash bond until the appeal was decided -- and records show she did that from October through April.

A trial date for May 15 was set at last week's court hearing.

Sharp took seven of her children, who perform as the Sharp Family Singers, to the Malheur National Wildlife Preserve to support the armed militants who refused to leave that federally owned land and claimed it for themselves.

“We’re here to sing for the Lord,” Sharp said at the time. “This is a very worthwhile cause, and we just hope to make a difference and we hope to just be able to bless the hearts of the people through the songs.”

The family also performed in 2014 at the Bundy ranch standoff, which many of the same armed militants took part in.

Many of those participants are now awaiting trial on a variety of charges in connection with both confrontations with federal authorities -- and one of them was shot dead by FBI agents as Sharp's daughter watched.

Victoria Sharp has claimed law enforcement officers opened fire on militant LaVoy Finicum's vehicle as he tried to flee arrest during a traffic stop, and she said FBI agents shot the rancher dead as he tried to surrender.

Law enforcement officials have released video and other evidence that contradicts the 18-year-old Sharp's claims.

Odalis Sharp, a single mother of 10, also took her family to perform at the State Capitol in Topeka in support of a Kansas family whose children were placed under supervision by the state's Department of Children and Families.

Sharp also has been investigated by child welfare officials, who removed her oldest child -- then 15 years old -- and placed him in foster care after social workers found that his mother had abused and neglected him.

A district court declined to overturn the department's finding, and an appeals court sided with the lower court.

Sharp said her son, who had run away from home before he was removed from her care, was simply unhappy with “the right, wholesome and pure path in which I was leading him — in which God was leading us.”

She testified in 2014 before a legislative committee that the state had stolen her son due to false allegations and placed him in a foster home where he ended up "in all kinds of trouble."

During the recent event at the State Capitol, Sharp accused federal authorities of trying to murder her daughter during the standoff with Finicum.