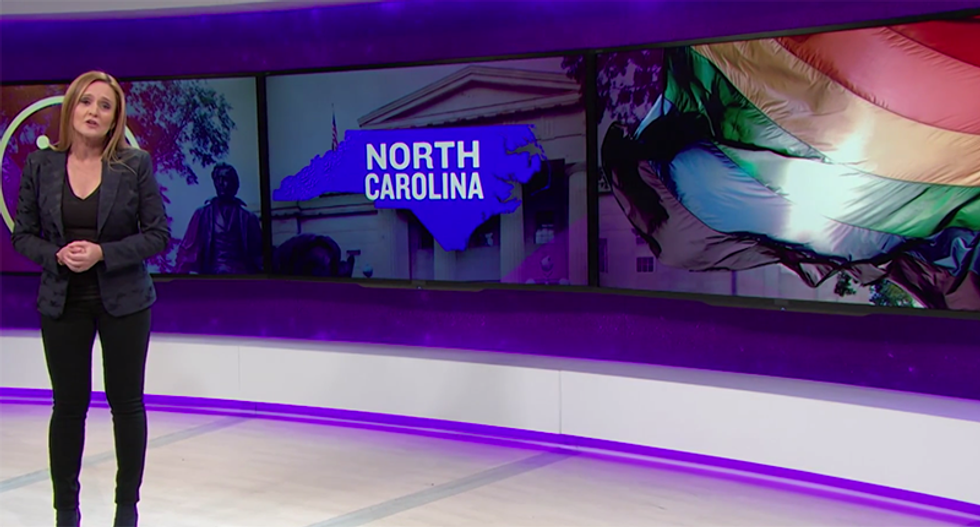 “Boycotts are a powerful tool — but you know what is a more powerful tool?" Samantha Bee asked her "Full Frontal" audience on Monday night. "Not electing a bunch of transphobic numbnuts who are going to wreck the state economy to catch a nonexistent criminal.”

North Carolina's HB2 has inspired boycotts from Pearl Jam, to Cirque du Soleil, to the $24 million in tourism the city of Raleigh is losing, to Springsteen, and even PayPal canceled plans to relocate some of their offices to North Carolina. But what caused it was the 2010 election that Bee says progressives and liberals "slept through" and allowed a bunch of idiots to get elected in North Carolina. They were once considered the "not crazy" Carolina, but now, that's all going away.

"It was a blue-state dream," Bee said looking back before the 2010 election. "Democrats controlled the Governor's mansion and legislature, welfare checks grew on trees and there was an abortion in every pot. But all that changed on Election Night 2010." For the first time since the 1800s, North Carolina had a Republican legislature. The result was a set of laws like allowing guns anywhere, even on playgrounds, and the new legislature also passed laws that restricted abortions and allowed people to inhumanely treat animals. "You know North Carolina's world-class public university? F*ck that place," Bee said before rolling a clip of reports about funding cuts and tuition increases for higher education.

That's right, crazy legislatures can do just about anything, including slash funding, appoint a racist skeleton with an Adam's apple as your new Gender Studies professor, change your team to the Shrugging Atlases and you can't do anything about it. Plus, remember that Pell Grant you needed to get through school? Well, the federal government is so furious about HB2, your state will lose access to it, along with $2 billion of other funding. "Great! Now your daughter will feel safe in bathrooms while she's scrubbing them for minimum wage!"

"I bet UNC students can't wait to vote those right-wing boobs out of office. Well, sorry, those boobs are actually way ahead of you on that," Bee said before showing a clip of a local news report talking about legislation that removed polling places from college campuses and denies students the ability to use their college ID to vote.

But North Carolina wasn't the only state to lose a lot from voter apathy in 2010. Republicans ended up controlling more state legislative seats for the first time since 1928. "After the 2010 landslide, policies started happening to states the way sex happens to people who drink with Bill Cosby." Bee shows maps that color in the states that have done the most damage since 2010 restricting freedoms for everyone but gun owners. "No wonder Democrats are so hung up on appointing the next Supreme Court Justice. They need him to strike down all the sh*tty state laws that might not have passed if they'd bothered to vote in 2010."

Bee closes with this: "Look, I know state elections aren't fun. They don't have cool concerts or dank memes. But, voting in them is important. Just think of it like a mammogram. It's painful and inconvenient, but you gotta do it. Because early prevention prevents a lot less than late stage treatment."