Seth Meyers: Racists love ‘not racist’ Trump — and there are enough racist voters to elect him 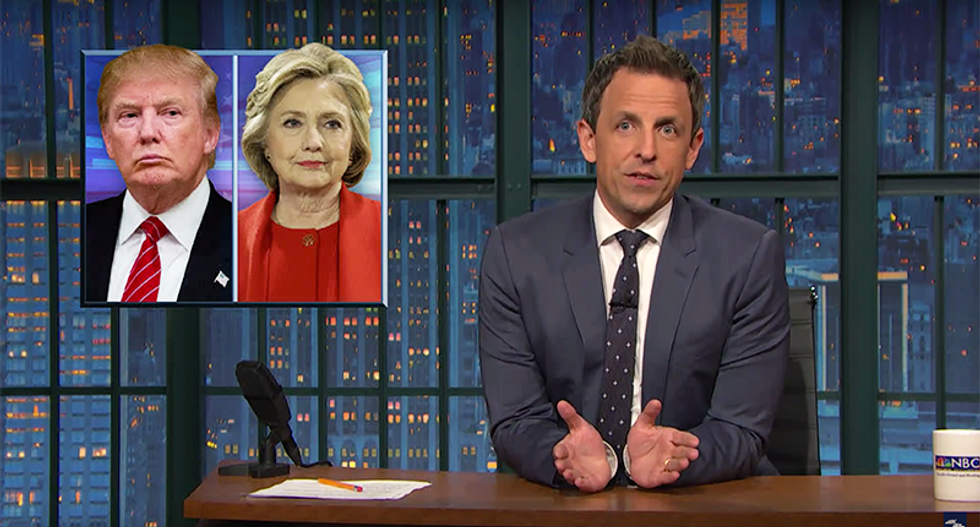 A recent poll showed Republican Donald Trump beating Hillary Clinton in major swing states like Ohio, Florida and Pennsylvania. However, there was a substantial flaw in the polling model: It was mostly white people. According to Seth Meyers this is just the latest in a long list of support coming from fans of white people, in particular, white nationalists and KKK leaders.

It's no surprise that the guy who accused the first black president of being a secret Muslim born in Kenya is winning among racists. The entire poll can be summed up with these two words, according to Meyers:

What is surprising is that there are enough racists to win swing states. Meyers says this should be a reality check to the Clinton campaign and no one should assume that Trump can't win the 2016 election. That said, Trump's biggest obstacle in the fall is the fact that non-white voters don't like him. The theory, Meyers explained, is that Trump can drive up white turnout so high it will eclipse turnout from Latinos, African-Americans and young people.

"Trump has done everything he can to alienate non-white voters," Meyers said, citing Trump's latest faux pas nominating William Johnson, a known Klansman, to be a delegate in California.

"A couple of things," Meyers began. "'Beautiful white children' should only be said in a confession at the end of an episode of 'Law and Order.' And the phrase 'Donald Trump is not racist' is a lot less convincing when it comes after the phrase 'gradual genocide against the white race.'"

Johnson’s inclusion on the delegate list from the campaign was nothing more than a database error, according to the Trump campign. "I get the sense that 'clerical error' might be a go-to excuse from the Trump administration," Meyers said, before joking that he could accidently build a wall around New Mexico and make America "grape" again.

So many white supremacists have come out for Trump that some of them have even tried to throw people off by saying they support Clinton. KKK Grand Dragon Will Quigg may have tweeted his support for Trump a million times, but he suddenly decided to endorse Clinton because, as he explained, "We don't like his hair. We think it's a toupee."

Meyers said that these close ties should give people in his own party pause, but most are falling in line instead. Even Marco Rubio is supporting Trump after calling him a "con artist," "unprepared to be president" and said it would be like "giving the nuclear codes" to an "erratic individual." In an interview with Jake Tapper on CNN, Rubio said that he signed the pledge to support the GOP nominee and he intends to do exactly that. That said, he was blinking an awful lot while he was saying it.

Check out the closer look in the video below: