Meyers: Only Trump could look at the glass ceiling and say 'let me get that for you, sweetheart' 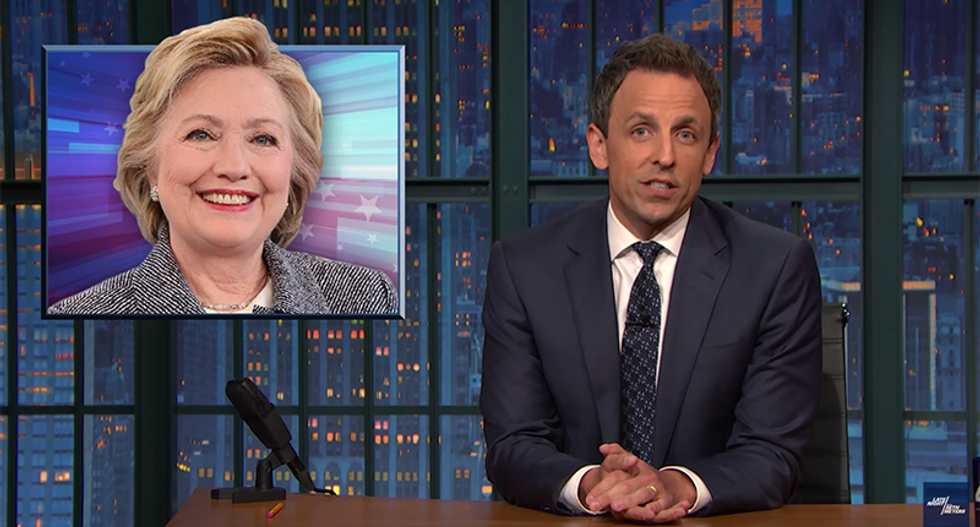 "Late Night" host Seth Meyers took a "Closer Look" at Hillary Clinton being named the first female nominee for president from a major party. Yet, somehow, Donald Trump managed to take credit for her success.

"Regardless of who you support or how you feel about Hillary Clinton, it's a remarkable feat and a breakthrough for women and girls everywhere," Meyers acknowledged. "Of course, if you ask Donald Trump, he totally did it first."

Meyers then played the June 6 Fox News interview with Bill O'Reilly, where Trump said, "I have great respect for women. I was the one that really broke the glass ceiling on behalf of women more than anybody in the construction industry."

"Only Donald Trump could look at the glass ceiling and go, 'Let me get that for you, sweetheart,'" Meyers joked.

But Hillary's achievement was historic, Meyers confessed.  "Especially when you consider just how much casual sexism she, or any woman in public life, faces on a daily basis. Even just down to her voice," he said before running clips of people journalist Bob Woodward, Geraldo Revera, Sean Hannity, Rush Limbaugh and Donald Trump talking about Clinton's "shrieking" and "shouting." Trump told "Morning Joe" in that interview that he guesses he'll have to get used to Clinton's voice and her shouting at him.

"You'll have to get used to her voice?!" Meyers exclaimed. "How do you think the rest of us are coping with your voice? Not only is it loud but it's on TV all the time. My internal thoughts aren't even in my voice anymore, they're in yours! 'My wife asked me to pick up milk on the way home, which is smart because I buy the best milk. Everyone says so. I'd like 100 percent milk.'"

Meyers also recognized how impressive Bernie Sanders' campaign has been, "going up against one of the most powerful political machines in the country, and won 22 states and won 10 million votes despite considerable resistance from the Democratic establishment and a media that long treated Clinton's victory as inevitable. Remember, when Bernie first got into the race, they didn't exactly love his chances," Meyers said before showing a clip of reporters and commentators dismissing Sanders' candidacy.

Even pollster Frank Luntz was snobbish when it came to Sanders' Democratic socialism.  In a Fox Business interview, he said that young people are "much more likely to get some action" by telling the opposite sex that they're a socialist. Meyers agreed with the assessment because in socialism everybody is going to get some.

One of the benefits of Sanders' candidacy is the impact it has had on Millennial voters, who now make up the largest generation of voters. A Havard study showed "...attitudes on a range of issues have become more liberal in the past year" and Sanders is "moving a generation to the left."

Sanders even had a huge influence on President Obama, who went from a Social Security policy that would recalculate costs of living expenses and reduce benefits. After Sanders entered the race and began advocating expanding Social Security, Obama began talking about "strengthing Social Security" not weakening it. "It's time we made Social Security more generous and increased its benefits..." Obama said in a June 1 speech.

"Next thing you know Obama's going to go to Supercuts and ask for 'The Bernie,'" Meyers joked with this hilarious photoshop:

But despite Sanders' success, when it comes to longshot candidates, he still comes in "a distant, f*cking, second," Meyers said flashing a photo of Donald Trump.

Meyers also showed clips of local news footage that interviewed voters at some of the more creative polling locations. One was in a funeral home, where the reporter asked people if they were there to vote or get a casket.

"Yeah, let me get a ballot and while I'm here, I guess, let me get a casket, too," Meyers said impersonating a voter. "The way this election is going we could all be dead in a few months, right?"

The whole casket-while-voting thing is a convenient arrangement for House Speaker Paul Ryan, because, as Meyers said Ryan "recently had to bury his dignity."