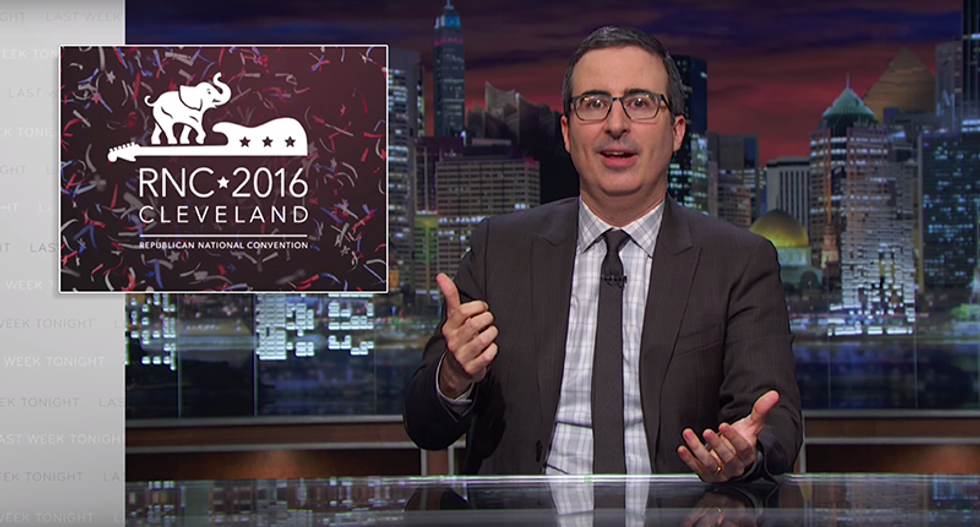 Comedian John Oliver returned to "Last Week Tonight" after a two-week vacation, just in time to digest the Republican National Convention, which he said was the most apocalyptic thing to happen to Cleveland -- "and bear in mind, their river has repeatedly caught fire."

After an epic takedown of Donald Drumpf, earlier this year, he took his attacks to a whole new level, calling the convention “a four-day exercise in emphasizing feelings over facts."

Many Trump supporters joined together in promoting Trump's business practices, claiming he's a visionary who gets things done like some version of Bob the Builder on steroids. There's only one problem with that narrative: His convention was a "mismanaged sh*tshow." Whether it's Melania Trump lifting Michelle Obama's speech, to Ted Cruz being booed off the stage, to the fact that Trump even knew Cruz wasn't endorsing him and didn't care.

Oliver pointed to a tweet from Trump that admitted he saw Cruz's speech and didn't care about it. "But that's not reassuring," he continued. "If the captain of the Titanic had tweeted after the fact, 'I saw that iceberg two hours before we sailed into it anyway. No big deal!' You wouldn't think, 'Wow, that captain sure ran a tight ship!'"

He even brought up a postmortem analysis after the last presidential election, where the GOP admitted that they have some problems. Namely, the GOP concluded that minorities believe that the GOP doesn't like them or want them in the country and that the GOP must emphasize the importance of a welcoming message for minorities. "Unfortunately, that report, and it's carefully considered suggestions, has been overshadowed by a different report Oliver titled: Literally Everything Donald Trump Has Said and Done."

The one moment that summarized the whole convention best came from Antonio Sabato Jr., who gave his speech before turning to ABC News to say about President Barack Obama, "First of all, I don't believe the guy is a Christian. I don't believe he follows the guy that I love, the Jesus that I love." He admitted that those things aren't based on facts but instead "feelings." He feels those things are true, even though they're not.

"Now, what's revealing there isn't the mistake in believing President Obama is a Muslim, it's also not a big shock that Antonio Sabato Jr. ... is still both alive and an idiot," Oliver mocked. "No, what is truly revealing is his implication of believing something to be true is the same as it being true. Because, if anything, that was the theme of the Republican National Convention this week."

After playing clips of Trump's hour-long speech, Oliver said it was like Trump was about to announce the first ever real Hunger Games. The facts are that crime rates have fallen since Obama took office, the flow of undocumented immigrants over our borders has declined and claims for unemployment are down. "And yet frighteningly, when reporters start pointing that out, it didn't seem to matter."

Oliver showed an interview with Newt Gingrich, where he completely disregarding any independent fact checks on Trump's claims about the crime rate as a perfect example. He concludes that his facts, which are inaccurate, are facts just like the CNN reporter citing the FBI's actual facts. "It's only a fact that that's a feeling people have," Oliver said, fact checking Gingrich.

"Liberals have a whole set of statistics, which theoretically may be right, but it's not where human beings are," Gingrich asserted.

Oliver couldn't take it. "It is worth taking just a moment to seriously consider what Gingrich is really saying there, because think about it, I think we can all agree that candidates can create feelings in people. What Gingrich is saying is that feelings are as valid as facts. So, then by the transitive property, candidates can create facts." Here's a helpful diagram to explain it: 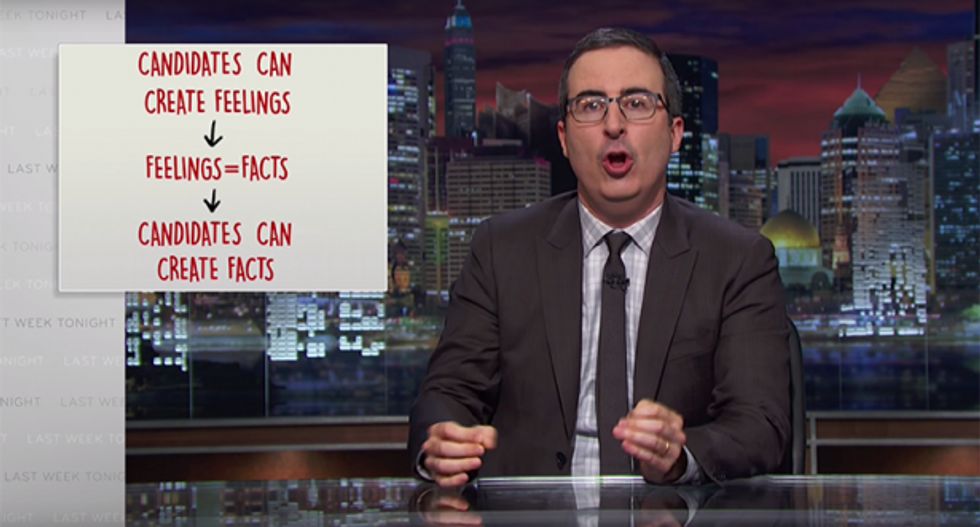 He called it terrifying because someone like Trump can ultimately create his own reality. For example, Trump apparently offered John Kasich the opportunity to basically be president if he took the VP slot. When Kasich's people asked Trump's people what Trump would be in charge of, they explained he'd be focused on "making America great again." That's not an actual job, however. "But I guess it feels like one and it seems like that's all that f*cking matters.

In the end, it all makes sense if you look at a special music video Trump did for the first season of "The Apprentice," where he called himself a dictator, declaring there is no judge nor jury. "Unless we're careful, by this time next year, that could be America's new national anthem," Oliver closed.