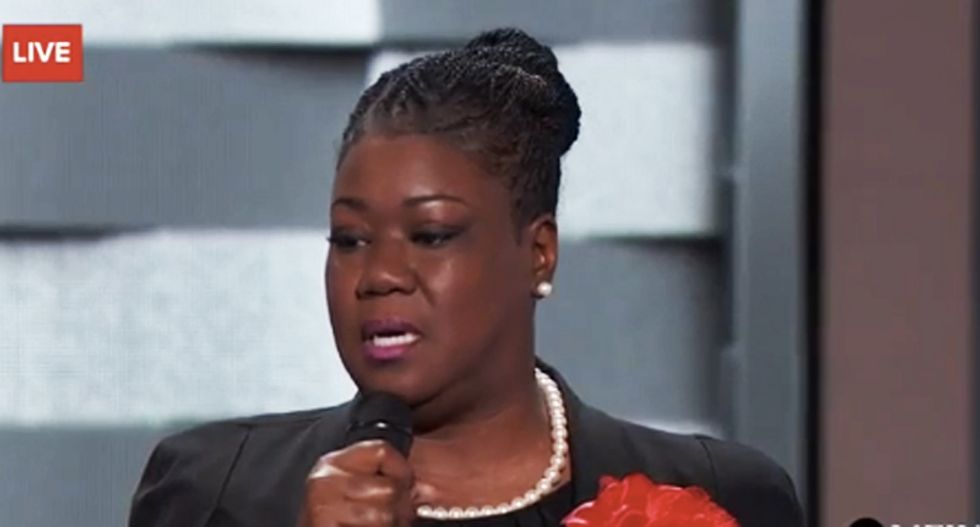 Three black mothers who lost their children -- the names above -- to violence took the stage at the Democratic National Convention on Tuesday night and hushed the crowd with tales of heartbreak.

In the three narratives that followed, they reminded the delegates and a national audience that, "We're going to keep telling our children's stories and urging you to say their names," in order to draw attention to police brutality and racist attacks.

Called the "Mothers of the Movement," Geneva Reed-Veal (mother of Sandra Bland), Lucia Bath (Jordan Davis) and Sybrina Fulton (Trayvon Martin) explained that what they are doing is not something they ever thought they would have to do.

"One year ago yesterday, I lived the worst nightmare anyone could imagine," explained Reed-Veal whose daughter died while in police custody. "I watched as my daughter, Sandra Bland, was lowered into the ground in a coffin. Sandy, my fourth of five daughters, was gone."

After lauding Democratic nominee Hillary Clinton as "a leader and a mother who will say our children's names," she added, "What a blessing to be here tonight, so that Sandy can still speak through her mama. And what a blessing it is for all of us that we have the opportunity, if we seize it, to cast our votes for a president who will help lead us down the path toward restoration and change."

Stepping forward, McBath said of her son who was gunned down in a parking lot by a white man, "You don't stop being a parent when your child dies. I am still Jordan Davis's mother. His life ended the day he was shot and killed for playing loud music. But my job as his mother didn't."

"I lived in fear my son would die like this. I even warned him that because he was a young, black man, he would meet people who didn't value his life," she said. "That is a conversation no parent should ever have to have."

Saying they had been invited by Clinton to be part of the solution to the violence that is killing black Americans she said, "And that's what we're going to do. We're going to keep telling our children's stories and urging you to say their names."

Speaking last, Fulton -- the mother of Trayvon Martin, who was gunned down by George Zimmerman in 2012 only to see her son's killer walk -- said, "I am an unwilling participant in this movement. I would not have signed up for this. None of us would have."

"But I am here today for my son, Trayvon Martin, who is in heaven," she explained "I didn't want this spotlight. But I will I do everything I can to focus some of that light on a path out of this darkness."

"This isn't about being politically correct. It's about protecting our children," she continued. "That's why we're here tonight with Hillary Clinton. And that's why, in the memory of our children, we are imploring you — all of you — to vote in this election. Hillary is the one mother who can ensure our movement will succeed."

"We leave you what God has given us, strength and peace."