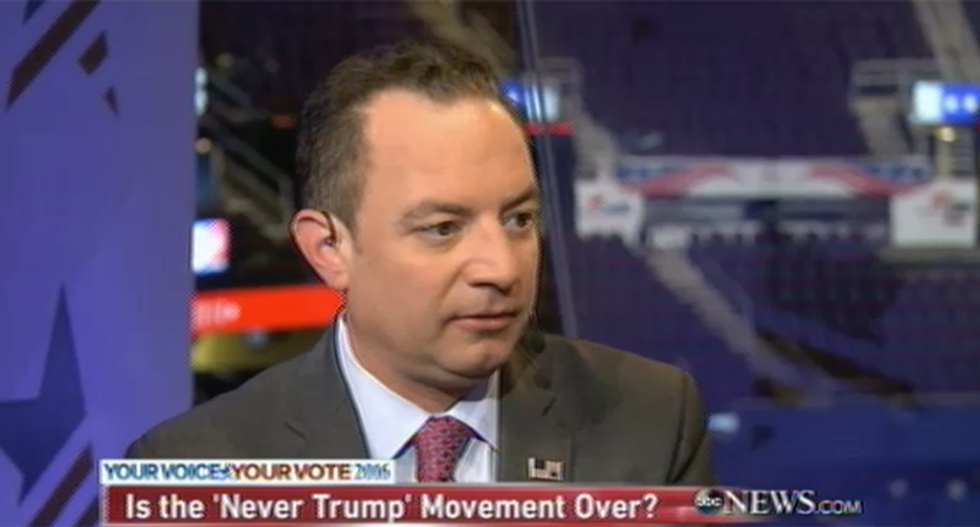 In an interview with ABC's George Stephanopoulos, Priebus admitted in passing that he doesn't expect that Republicans will get all that big of a bounce coming out of the GOP convention this week. "I don't — I just want a bounce, I don't want to predict how big," Priebus said while Stephanopoulos chuckled. He also admitted that he is putting all of his eggs in the Trump Thursday night basket, believing that Trump delivering a great speech would "go a long way."

Stephanopoulos also remarked that at the Democratic convention two former presidents would be speaking along with a sitting First Lady and sitting Vice President where the Republican Party hasn't been able to get the past two sitting Republican presidents or the last two Republican nominees to agree to participate.

Priebus swore it didn't concern him. "I was chair at the last convention and we didn't have the last two presidents there, and that's their choice, we love them dearly. The same thing happened in St. Paul," he remarked about the conventions before the GOP nominees lost those elections.

"Surrounding Hillary Clinton with all of these politicians and political fixtures, I don't know what that gets her," he maintained.

Priebus insisted that former President Ronald Reagan had some of the same problems as Trump going into the convention. "What it does show, in reality, is that there's a lot of space to grow," Priebus said of Trump's low poll numbers from people who think he's qualified to be president. He also said that Trump has really ratcheted down his verbal diarrhea to be more precise in his attacks, which gives him more room to grow.

Priebus admitted it wasn't exactly, but claimed that Trump had several days of attacks he wanted to respond to, and did so. "It's Donald Trump. He wants to respond. That's how he is." But Priebus has been assured in private that Trump knows he needs to pivot and become the official nominee.

Stephanopoulos asked if Priebus thought he could use the week to bring up Trump's low "qualified" numbers and Priebus agreed. "Who you want to have a beer with, is a great question on a ballot he can win that." He also commented that people "want to like him" because "he's interesting, he's intriguing." He assured Stephanopoulos that Trump is "getting there" and "he's going to pivot there."

When it comes to choosing Indiana Governor Mike Pence, Priebus used it as another example that Trump is ready for prime time. "Mike Pence is the mature pick," he said. "And I also think he gets it totally."

When there were reports swirling that Trump was having midnight regret about his VP pick, Priebus insisted it was simply all talk. "He wanted to keep people guessing," Priebus told Jake Tapper on CNN. "But he was with Pence."

However, Democrats are already in attack mode on the new pick. Stephanopoulos showed the ad that goes after Pence's determination to shut down the federal government over Planned Parenthood funding and his desire to overturn Roe v. Wade. The media is already pointing out that Pence is one of the most rabidly anti-choice politicians in the country. Priebus repeated tired GOP attacks claiming Planned Parenthood was selling baby parts, which Stephanopoulos countered was untrue. He also tried to say that the American people are with the GOP in that they don't want federal dollars paying for abortions. The Hyde Amendment outlawed that in 1976.

Delegates who oppose Trump are threatening to use parliamentary procedures to shut down the nominating process at the GOP, but Priebus assures Stephanopoulos it'll never happen. "They don't like the idea that 14 million people and grassroots picked someone that they didn't want to support. Well, it's a binary choice, it's Donald Trump or Hillary Clinton," he insisted. Instead, he plans to ensure that the rules are followed, and doesn't think the #NeverTrump movement has the votes to block anything.