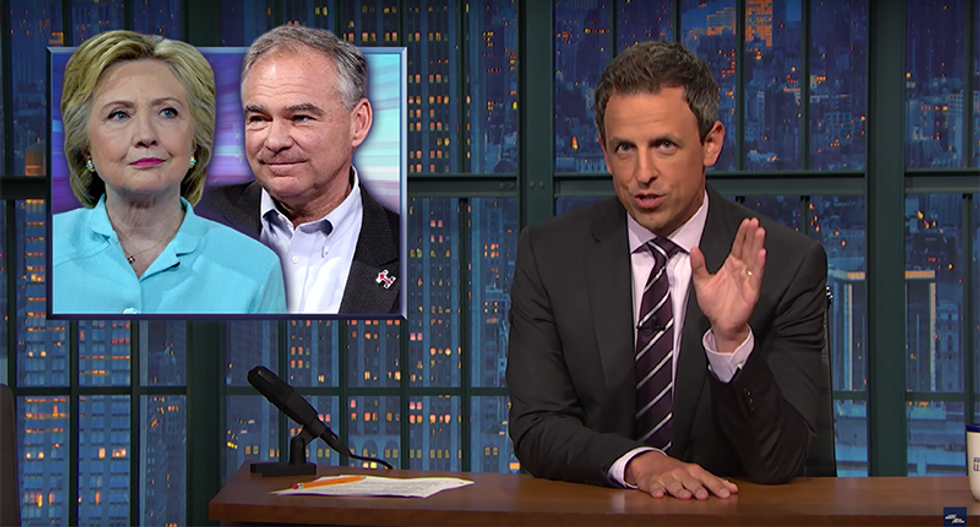 After clips of multiple pundits calling Tim Kaine the "safe choice," Meyers explained the only way Clinton could have picked a safer choice was if she'd gone with a Volvo wearing a bike helmet. "Kaine is so safe he gives speeches in a life jacket," Meyers joked. "He's so boring he makes Mike Pence look like Guy Fieri."

Meyers noted that the VP is supposed to serve as the attack dog, but when it comes to Kaine, everything he says sounds so friendly that he's like the attack dog that "licks the burglar's hand while he's stealing your candlesticks." There is one thing Kaine can do that will get under Trump's skin, however: Speak Spanish.

"Look at Hillary's face behind him," Meyers said while Kaine was speaking Spanish. "Look at her! Ha ha ha! Yes! We are enfuego! Mucho Presidente! When Trump saw that, I can only imagine how red his face stayed. He probably screamed, 'He's a Mexican! She picked a Mexican!' And then someone explained to him that some people are bilingual, and he said, "Well, then I should buy some lingual. I'm very rich.'"

Theoretically, everything should go smoothly at the DNC with the safe candidate and her safe pick for VP, "as long as there's not, I don't know, another email scandal?" But then there was. "Emails to Hillary are what snakes were to Indiana Jones. 'Emails? Why did it have to be emails?' Also, when hearing about this leak, imagine the restraint Hillary has to exercise in not screaming at the top of her lungs, 'This is why you have a private email server!'"

One of the emails questioned Bernie Sanders' faith, another was pitching stories about his campaign being a mess. "A mess? I don't know, seems like he's the only Democrat who knows how to use his f*cking email," Meyers joked.

The whole scandal resulted in DNC chair Debbie Wasserman Schultz being forced to resign and a DNC apology, but she still hoped to talk to her home state of Florida. That didn't go well either. "What did you think was going to happen?" Meyers mocked. "It's like you got a group invitation to a birthday party and then accidently replied all, 'Is fat Kevin going to be there? If so, we should have two cakes.' Once you do that, you cannot go to the party anymore!" Meyers tried to explain with urgency.

So, Wasserman Schultz was gone and the whole ordeal should have been over, but then Clinton decided it would be a good idea to name her as an honorary co-chair to the campaign. "I'm sorry, is this Hillary's plan to woo angry Bernie voters? First, she overlooked progressive VP choices and chose insider Tim Kaine. Basically, Hillary said, 'Have you been feeling the Bern? Why not try some Nova-Kaine.' And then she added Wasserman Schultz to her team, despite her anti-Bernie sentiments. What's next? I'm impressed she didn't pants Bernie during his speech tonight."

Sanders had every right to give everyone the finger, but instead, spent Monday reiterating his support for Clinton, even though he got booed by his own supporters. Even Trump was surprised by the graciousness. Meyers said he probably emailed Ted Cruz the Sanders speech, saying, "Maybe this next time, as*hole."

In a deep dive for the New Yorker, journalist Jane Mayer wrote that former Senate Majority Leader Mitch McConnell (R-KY) wants to sever all ties between the Republican Party and former President Donald Trump because of the damage he has done to the party.

In interviews with associates of McConnell, they point out that McConnell has always loathed Trump but saw him as a means to end to stack the courts and advance his own agenda, but after the loss of the two Senate seats in Georgia that were held by Republicans and the storming of the U.S. Capitol, he wants Trump banished from the GOP.

As Mayer reports, "Unnamed associates revealed to reporters on Capitol Hill that McConnell was no longer speaking to Trump, and might vote to convict him if the impeachment process moved to a Senate trial," before adding that Rep. John Yarmuth (D-KY) relayed, "Three years ago, I said he'd wait until Trump was an existential threat to the Party, and then cut him loose. He's been furious with Trump for a long time. Many who know him have talked with him about how much he hates Trump."

As it stands now, McConnell would like to see Trump impeached -- as well as banned from running for office again -- as long as he is not blamed for it.

"Any pretense that McConnell could maintain control over Trump or over the Party's fate unravelled after the 2020 election," Mayer wrote. "McConnell was caught between denouncing Trump's lies and alienating his supporters, thereby risking the loss of the two Senate seats in the Georgia runoff. Faced with a choice between truth and self-interest, McConnell opted for the latter."

With the loss of the seats -- costing McConnell his Majority Leader spot -- as well as the Trump-inspired attack on the Capitol that left five dead and the country horrified, McConnell has realized that the ex-president has outlived his usefulness.

"If McConnell can muster the additional sixteen Republican votes necessary for a conviction—doing so requires the assent of two-thirds of the Senate, and the fifty Democratic senators are expected to vote as a bloc—he will have effectively purged Trump from the Party," Mayer wrote. "Moreover, after a conviction, the Senate could hold a second vote, to bar Trump permanently from running for any federal office. Such a move might strengthen McConnell's clout within the Party and help his wing of traditional Republicans reëstablish itself as the face of the G.O.P."