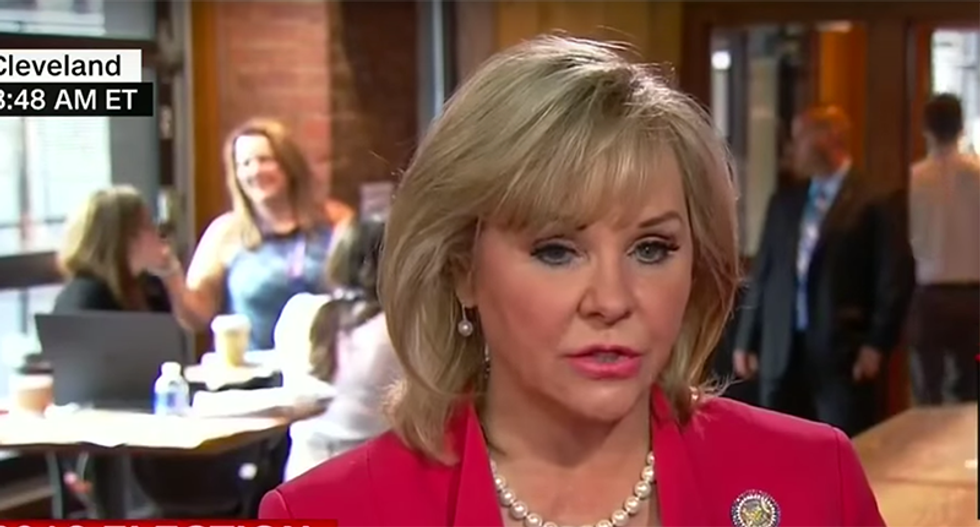 Oklahoma Governor Mary Fallin was an early supporter of GOP nominee Donald Trump's, despite his open support of LBGT people. Yet, when it comes to the Republican Party platform, that support turned into homophobia.

On CNN Monday morning, Fallin, the co-chair of the GOP platform committee, trotted out Trump's slogan "make America great again" and claimed that this new generation of the Republican Party will “stand for the human rights of all people, not just one segment, one class, one race, one preference, but for all people in the United States.”

The problem with that, however, is that the GOP platform supports harmful LGBT conversion therapy, believes marriage is only between a man and a woman, argues transgender people can't use the bathroom that makes sense for them and even came close to saying that every child deserves a "married mom and dad."

The Daily Beast reported last week that Hoff might be an out LGBT person, but the committee itself is comprised mostly of anti-LGBT loons. Including one Baptist Deacon, who took out a newspaper ad claiming homosexuality is “killing people 2 to 3 times the rate of smoking.”

Another platform committee member once accused LGBT rights activists of doing “the same type of thing that was done in pre-Holocaust Germany, as far as propaganda and presentation and swaying the whole mindset of a nation.”

“The main thing is, we think all human beings, no matter who you are, deserve respect, deserve equal treatment, and should be respected in all that we do, and be protected,” Fallin claimed in her word salad.

“We’re still a party that believes that marriage is between one man and one woman, but it doesn’t mean that we’re going to kick people out,” RNC chair Reince Priebus said. “I can’t win this race if I tell people that they’re not welcome in our party.”

A Trump surrogate told CNN last week the GOP party platform isn't as bad as death, claiming "I mean, heavens, we just had this terrible, terrible situation in Orlando where somebody who was devoted to radical Islam, which is quite hostile — I mean, seriously hostile to gays — went in and murdered 49 people in cold blood. I mean, we do have to have a sense of proportion here."

The Log Cabin Republicans, the LGBT members of the GOP, sent a strongly worded letter to the RNC about the platform expressing their concern.