Donald Trump Jr. throws his dad’s ridiculous CNN surrogates under the bus: 'I can't even watch it' 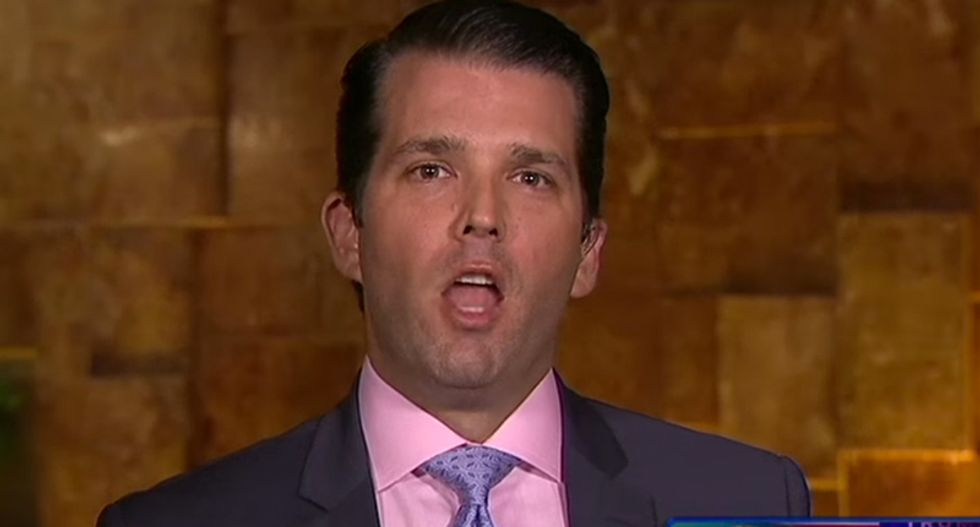 If you've watched Trump surrogates engage in debates on CNN, well, you know that they leave a lot to be desired.

Apparently Donald Trump Jr. has noticed that people who go on CNN to defend his dad frequently fail miserably at their jobs -- and he thinks it's part of a media conspiracy to make Trump supporters look stupid.

BuzzFeed notices that Trump Jr. went on Sean Hannity's radio show on Wednesday and complained about all the people that go on CNN to defend his campaign. In particular, he fumed that CNN seemed to drag random Trump supporters "from the street" to debate against "professional" Democrats.

"The worst [segments] are when they have a panel of eight professional -- liberal, but professional -- people on a panel, and they find like one Trump supporter from the street, who has no real political knowledge, and they just happen to be supporter," Trump Jr. said. "And they put that person up against 8 people who do this for a living and try to make it seem like that’s a fair fight."

Of course, CNN uses a wide range of pro-Trump pundits on its program, including campaign spokeswomen Katrina Pierson and Kayleigh McEnany , as well as former campaign manager Corey Lewandowski. Other top surrogates that regularly appear on CNN include Jeffrey Lord and Healy Baumgardner.

While Trump Jr. didn't name any names in his bit with Hannity, it seems likely that he had some of these people in mind given their comically inept performances on cable news shows.

"I mean, it’s so ridiculous I can’t even watch it anymore," Trump Jr. said of pro-Trump surrogates on CNN.

Unfortunately for his father's campaign, the rest of us can't look away.

Listen to the full clip of Trump Jr. on Hannity below.