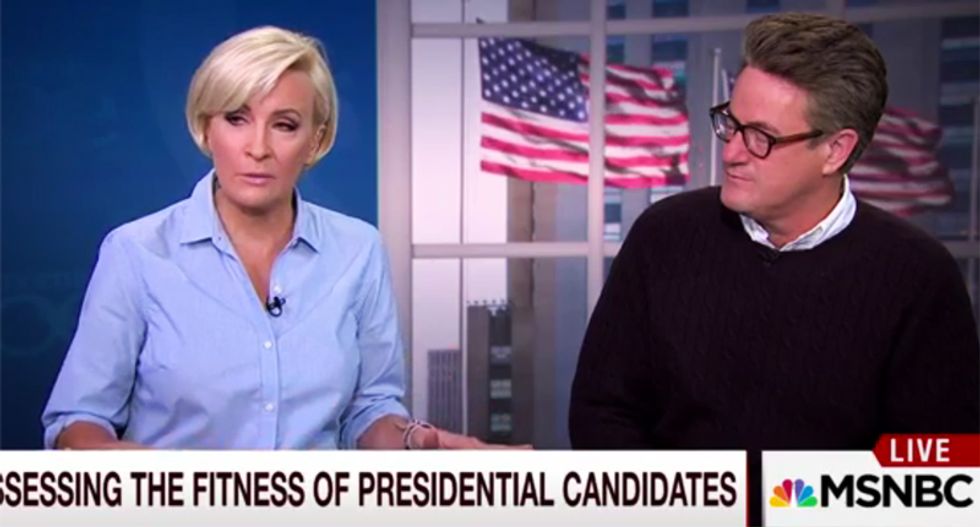 One day after Barack Obama's former campaign manager called Donald Trump a "psychopath," MSNBC's Mika Brzezinski picked up the ball and ran with it, saying the GOP presidential nominee needs to see a psychiatrist for the good of the country.

After guest Howard Dean, a former doctor, noted that Trump exhibited signs of classic narcissism, Brzezinski jumped in to discuss the elephant in the room.

"It's time to hear from somebody in the mental health community, to look at this person who has been on television for months and to give us a sense of what we have going on here," she remarked. "And, I'm sorry, let's just not—let’s stop pretending we're dealing with someone who we can completely understand."

"When you see someone who you think has problems, you know it," she continued, before bringing the rest of the panel into the discussion. "And there's not anybody at this table who doesn't think he has some sort of problem. Let's ask the questions. Let's do this at this point. Let's set up someone and ask the … questions."

"Does anyone think that's completely outlandish and only because I have some sort of weird, snarky slant to it and I want to be smart? I think there’s an issue there," she insisted.

Morning Joe host Joe Scarborough jumped in by saying, "First of all, a psychiatrist cannot come on and diagnose somebody," before adding that David Plouffe might have been more accurate by calling Trump a "sociopath."

"No, but they can talk about the character traits that we are seeing repetitively here," Brzezinski shot back.

Guest Eddie Glaude of Princeton offered, "We can't say that he's just, something’s mentally wrong with him as an easy way to dismiss him."