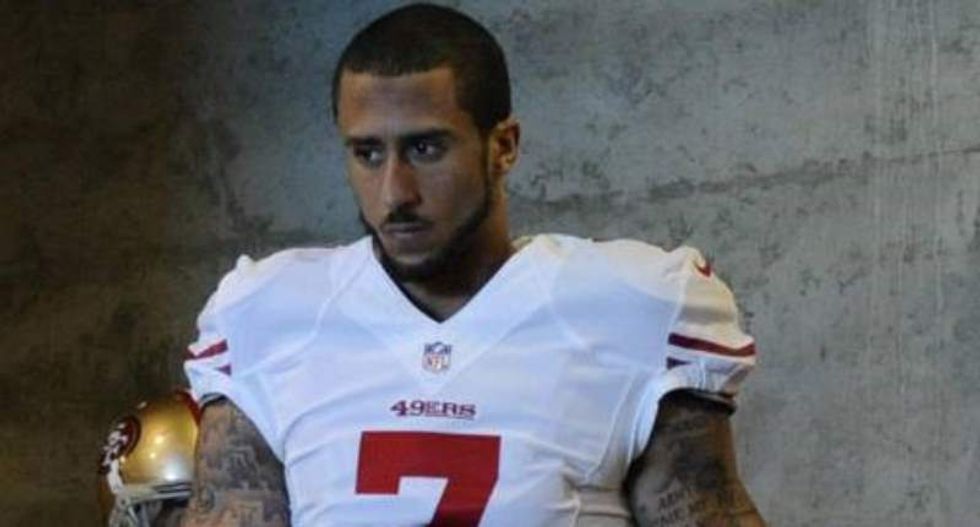 The union representing more than 2,000 police officers in San Francisco complained to the National Football League and the San Francisco 49ers over Colin Kaepernick's protest against overaggressive policing, KNBR-AM reported.

"Not only does he show an incredible lack of knowledge regarding our profession and 'officer involved' shootings, but also shows a naivety and total lack of sensitivity toward police officers," San Francisco Police Officers Association (SFPOA) president Martin Halloran said in the letter, which was sent to NFL commissioner Roger Goodell and team president Jed York.

Kaepernick specifically named police brutality as the reason he refused to stand for the national anthem prior to the 49ers' pre-season game over the weekend, as he also called for increased training standards for officers.

"You have people that practice law and are lawyers and go to school for eight years, but you can become a cop in six months and don't have to have the same amount of training as a cosmetologist," he said. "That's insane. Someone that's holding a curling iron has more education and more training than people that have a gun and are going out on the street to protect us."

In response, Halloran said that the quarterback failed to address the "emotional and psychological challenges" the union's members encounter after killing someone in the line of duty, and accused Kaepernick of pushing a "false narrative" blaming officers. At the same time, Halloran invited Kaepernick of going through a day of training at the local police academy.

"Perhaps Mr. Kaepernick could comment on the murder of 40 police officers in the United States in the past few months, or the assaults perpetrated on over 100,000 law enforcement officers in the past year," Halloran wrote. "Perhaps he could lend his commentary to the over 8,000 murders that African-Americans inflicted on one another."

Similarly, Halloran's letter failed to mention reports linking more than two dozen local officers to the possible sexual exploitation of a young woman -- a case which led the Oakland Police Department to go through three police chiefs in less than a month earlier this year.

The union letter also failed to address the findings of a three-judge panel last month showing evidence of "institutionalized bias" within the department targeting African-Americans and Latinos for traffic stops at disproportionate levels compared to Asian-American and white residents.