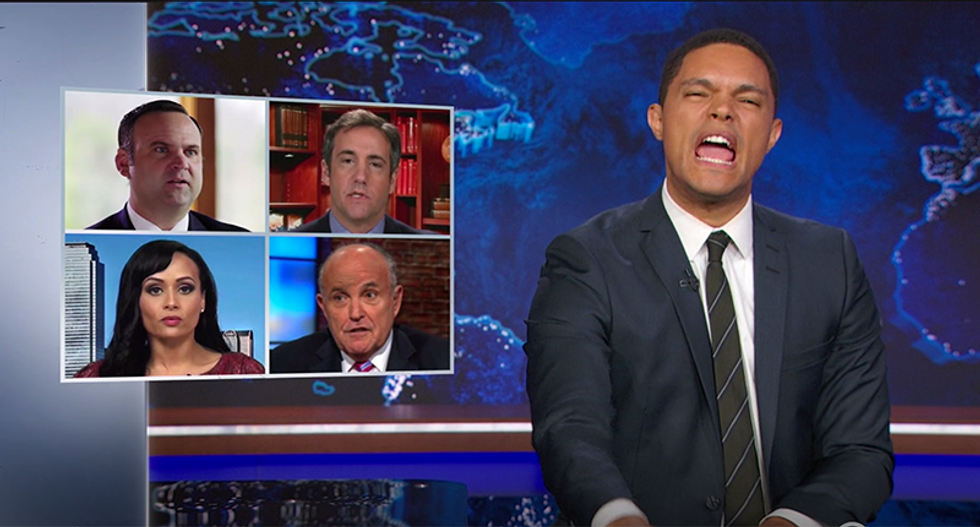 Presidential candidates can't be everywhere at once, so they rely on campaign surrogates to appear on television. But Trevor Noah made the argument on Monday night's "Daily Show" that Donald Trump's surrogates are "special because Donald Trump is special."

"Trump is known for making interesting choices, "like cleaning the fur out of a dog brush to use it as a wig," Noah mocked.

But when it comes to surrogates, having "spokesgoblin" Katrina Pierson has been something special, indeed. Over the weekend Pierson got caught falsely claiming that the war in Afghanistan began under President Obama's administration. This after she also mistakenly blamed President Obama for Cpt. Khan's death in 2004, when Obama didn't take office until 2009.

“I really feel so bad for her and all of Donald Trump’s surrogates,” Noah said. “Because that has to be the hardest job in the world. As a surrogate, whatever a candidate says, the surrogate has to defend it." Like that time Trump said President Obama and Secretary Clinton founded ISIS (They didn't).

But Pierson was not the only Trump surrogate to short-circuit. Others seem to have had troubles working through Trump's latest claims.

“Obama was not the founder of ISIS. It is crazy that you have to say this, but let’s get that straight, all right," Noah clarified. "George Bush was the founder. No, look, really, Bush wasn’t the founder, either. But if any president helped create it, he did the most.”

Pierson ended up in a position where she was forced to say both "yes" and "no" about President Obama being the founder of ISIS. Not only did it call into question her sanity, it probably put her candidate in a complicated position.

It makes Noah feel pity for the poor people. At some point, while they're stuck in a television studio, defending the latest bit of crazy from their guy, Trump will inevitably swivel and change his position so that it "royally f*cks them," Noah said, referring back to Trump's indecision about sarcasm.

“That’s exactly what America needs in a president,” Noah said. “A man so all over the place even the people who are hired as communication specialists are now basically the shrugging emoji.”