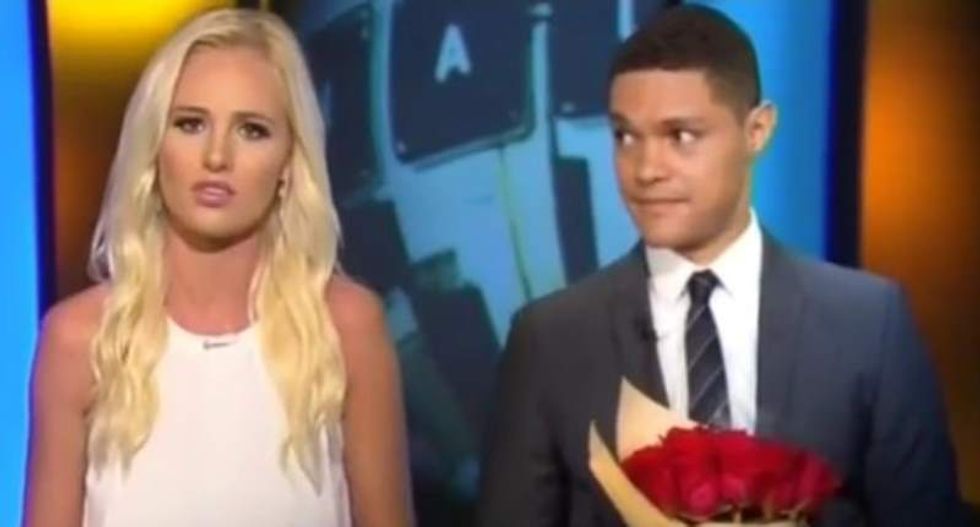 Daily Show host Trevor Noah admitted on Thursday that he's become an admirer of conservative counterpart Tomi Lahren -- even though he knew he shouldn't be.

"She may be young, but she'll surprise you. She's like a child soldier," he said of the Blaze personality. "I didn't even know you guys had them in this country."

Noah pointed out that Lahren's Facebook posts have drawn millions of views, even though many Americans have not heard of her. To get his own audience up to speed, he played footage of her berating actor Jesse Williams for criticizing racism at the BET Awards.

"That is the least-woke, most awake person I have ever seen," Noah said of her. "She's only 24 years old. And she's already angrier than 50 Clint Eastwoods."

But her biggest hit, he said, was Lahren's outraged declaration that San Francisco 49ers Colin Kaepernick should leave the US instead of protesting police brutality.

"That statement is so ignorant. Kaepernick can't leave -- America's the only place that plays football," said Noah. "But I must say, I do love this logic: 'Shut up and be happy that no one forces you to shut up. Because that's what makes this country great, is that you can't complain stop complaining.'"

Despite her hot takes, Noah couldn't help but imagine himself joining her on her show, before coming to his senses.

"We're from two different worlds. It just wouldn't work. I'm from Africa, you're from heaven," he reasoned. "But hey, we'll always have Facebook."