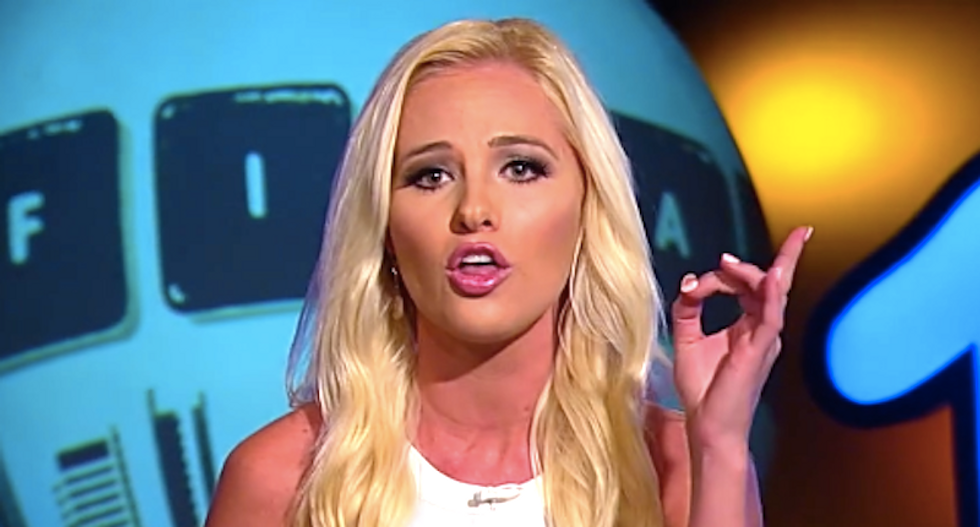 Colin Kaepernick is taking a stand by sitting out the national anthem to protest racism against black Americans -- and, not surprisingly, conservative ranter Tomi Lahren disagrees with his symbolic gesture.

The white grievance cheerleader from Glenn Beck's channel The Blaze posted a video Monday night on Facebook warning the San Francisco 49ers that his citizenship was conditional.

Lahren argued that the American flag was not a symbol of black America or white America -- or the fabled purple Americans sometimes cited by defensive racists -- but rather a symbol of patriotic military sacrifice.

"There are patriots of every race that have fought and died under that flag," Lahren said. "We honor the flag and sing the anthem as a reminder."

Lahren urged Kaepernick, who was born in Wisconsin and grew up in California, to leave the United States if he couldn't accept things exactly as they are.

"Colin, if this country disgusts you so much -- leave," she said. "I guarantee there are thousands and thousands of people around the world who would gladly take your spot, because those that don't live under this flag are banging on the door to get in, not get out. Remember that."

Lahren, who recently justified police violence against blacks while also denying its existence, admitted "our country isn't perfect," but she asked Kaepernick what he had ever done to make it better -- betraying her own fundamental misunderstanding of the quarterback's protest.

"What's your contribution? Sitting there like a fool?" she said. "What's selfish is you, buddy. And what's your message to black kids, to people of color? That their biggest contribution to justice and self-fulfillment is to parade around with a chip on their shoulder like a victim?"

Lahren thought the biracial Kaeperick, who was born to a 19-year-old white woman and adopted at six weeks old by a white couple, should be more grateful.

She suggested Kaepernick decline his paycheck because the 49ers owner was white, and urged him to be more appreciative to the white fans who bought his replica jerseys and cheered him on the field.

"What about the oppression of black people?" Lahren said. "It's funny -- through that six-year career of yours, you choose to start sitting now? What changed to make you so resentful of your country? Please tell me how you're oppressed."

The social media celebrity then rattled off some frequently cited metrics of racial inequality as if they were things black Americans did not notice or perhaps even promoted.

"Is it because the black unemployment rate is double what it is for whites?" Lahren said. "Or the homicide rate, or the dropout rate, or the percentage of minority communities on food stamps?"

Lahren said President Barack Obama had been given a chance to end racial injustice but had been unable or willing to do so.

"Well, we've had a black president for almost eight years now -- maybe he failed you," Lahren said. "We also have a black woman in charge of the Justice Department -- maybe she failed you, too. Or maybe it's the liberals, your saviors, which have run your communities into the ground. Where does the buck stop? When will those in black communities take a step back and take some responsi-damn-bility for the problems in black communities. Because it seems to me, blaming white people for all your problems might make you the racist."