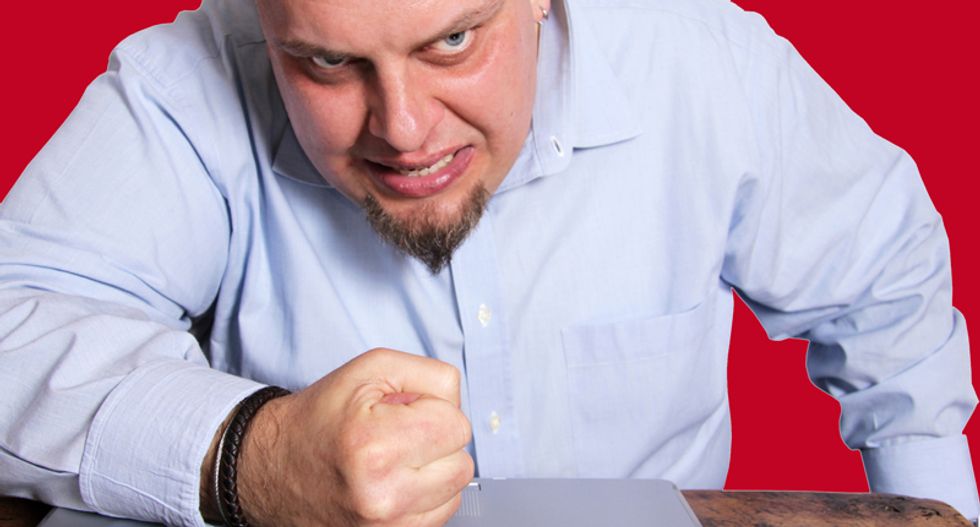 Fox News tweeted out a report on overnight clashes between protesters and police in Charlotte, where officers gunned down a disabled black man who relatives say was armed only with a book -- which triggered a basketful of deplorable responses.

Abby Huntsman reported that "massive and angry crowds" shut down Interstate 85, "looted" vehicles and set fires, and one minute into the report she got around the describing the police shooting that sparked the protests.

She first reported that police said 43-year-old Keith Lamont Scott got out of his car holding a gun as they looked for a suspect, as Fox News aired video of a shirtless black man kicking a patrol car.

Huntsman then reported Scott's relatives said he was disabled, unarmed and waiting to pick up his son from school, and Fox News played video of the emotionally raw response of the slain man's sister.

Fox fans responded to the news the only way they know how: with racial slurs, violent threats and Donald Trump slogans.

"Maybe this can win NC, have to see how it swings. #MakeAmericaGreatAgain #basketofdeplorabes," harrumphed Jonathan T. Lovitt.

"We need Mr. Trump to bring jobs back so these people have better things to do," tweeted someone who goes by the name ALF and uses a photo of an orangutan for an avatar.

"What do blacks do when n*****s point a gun at them? Apologize? Probably not!" posted someone called bridd, who quite possibly thinks this tweet is not racist.

"Unfortunately, it looks like we're gonna have to bring back the N-word!" posted the Twitter egg called Lily Von Schtupp.

"F*ck these #savages. shoot them all that way we dont have to pay to jail them," opined Deplorable KGB Greg.

"Why do the police allow this rioting and looting what ever happened to water cannons & rubber bullets..." said a Twitter parrot called Rock.

"Just what this country needs, more riots, ehmm 'peaceful protests'! The Instigator-in-Chief must be thrilled!" said Mrs. Deplorable, or @JuttaDurham, illustrating her point with a photo of a black man walking away from a burning police car holding a package of toilet paper, with President Barack Obama's head superimposed over the man's face.

"Distespectful Americans, ungrateful of the TRUE Freedom they have😢" whined Melissa Dumesnil.

It's uncanny how the "blue lives matter" crowd deny that police brutality exists but call for exactly that when protests break out over officer-involved shootings.

"Time to turn the fire hoses on these animals! Enough is ENOUGH!" said Lily Von Schtupp.

"Won't it be great when we see violent protesters get violent treatment from police officers that they deserve," fantasized foxcnn, otherwise known as @darby_bartley.

"Send the army in with live ammunition," suggested the constitutional scholar known as Deplorable John G.

"Time to unleash the national guard and shut this shut down and shut it down hard," wished maurice greer, or @pete_greer.