James Corden turns tables on Trump: He called half of Clinton’s supporters ‘deportable’ 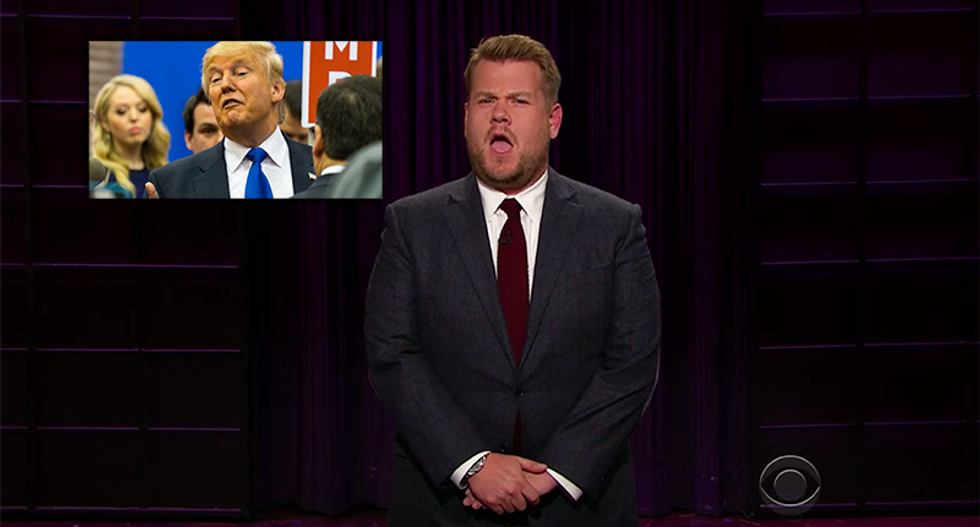 Democratic candidate Hillary Clinton's side-eye at half of Republican opponent Donald Trump's "deplorable" supporters would be shocking if Trump hadn't called half of Clinton's supporters a "basket of deportables." At least, that's the take "Late Late Show" comedian James Corden had Monday night.

Over the weekend, Clinton insult blew up as "racist, sexist, homophobic, xenophobic, Islamophobic — you name it," people seemed offended that Clinton wasn't being more politically correct. As a result, Trump's campaign created a quick 30-second ad playing Clinton's words while showing b-roll of his own supporters in crowds. Corden isn't sure how this refutes Clinton's claim, however.

"Now, I'm no campaign expert, but when your opponent calls your supporters racists, you don't want to be saying, 'People like you, and you, and you,'" Corden said after showing the ad. "You know the woman in that video is like, 'Me?' Although maybe she's bragging about it, like, 'Hey, did you see me in the new Trump ad? They said I'm a xenophobic!'" he exclaimed, clapping.

Clinton also took a bit of a stumble on Sunday, when she became overwhelmed by pneumonia and heat at a 9/11 memorial.

"This was a scary moment for Trump because he was thinking, 'Oh, God, I might actually have to be the president!'" Corden joked.

While Trump's supporters filled the internet with even more rumors that Clinton was dying, he told Fox News he hopes Clinton gets well soon and gets back on the campaign trail.

"Um, I mean, forget Hillary, is Trump okay? I think he has a concussion or something," Corden wondered about Trump's strange well wishes.

Corden said he can't blame Clinton for getting a bit overheated this weekend. "I was in New York this weekend and I have to say it was the most humid, disgusting weather I've ever seen. Everyone had that thing, you know when everyone's upper lip get's condensation? Like the bottom of an iced coffee? Let's just call it what it is, sweat mustache. It was a sweat mustache. I mean, it was, really, in New York City, I passed out from exhaustion while I was there and that was from just tapping my phone to get an Uber."

Corden also brought up the recent study that proved that the "5-Second Rule" isn't real. He claimed it clearly was real because he's still alive.