Joy Reid smashes ‘bully’ Trump: He’s ’only aggressive' when he's not around the victim he's bullying 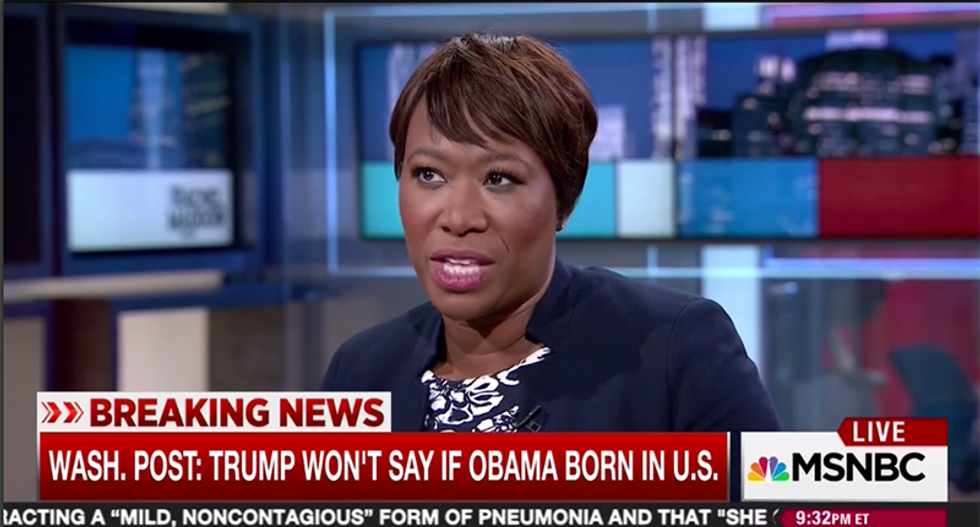 Today, the Washington Post reported that despite Trump's efforts to court African-American voters, he refuses to acknowledge that President Barack Obama was born in the United States, much less apologize for the years of birtherism.

“I’ll answer that question at the right time,” Trump told The Post. “I just don’t want to answer it yet.”

Trump has since released a statement blaming Clinton for his birtherism.

Maddow wondered what was "so politically salient" about that old campaign against Obama and his birth certificate.

Reid cited poll numbers from the Republican primaries that showed half of the GOP voters believed Obama's birthplace was suspect. In fact, more were suspicious of Obama's birthplace not being in the U.S. than Ted Cruz, who was actually born in Canada.

"You are seeing Donald Trump at his peak self-confidence," Reid said. "When he gets into the mode of saying he doesn't have to change fundamental things because he feels right now that he is winning. So, he is going back to the well, going back to things he thinks make him popular."

For Trump, that means things like the birther campaign, which he must fix. Reid said that he is making an effort to insert himself into African-American communities. Flint for example, where Trump visited a black church Wednesday.

"Good for him," Reid said. "He is getting involved in a way that the mayor and local officials are like, 'You are not helping.' He had this incident at the church. He is speaking before a stone-faced, not interested, sparse group of mostly African-Americans, sort of a youngish — mostly African-American crowd. The headline moment was when the pastor said, 'This is not what we asked you to come here for. You are not supposed to make a political speech.'"

Reid remarked that on Fox News Thursday morning, Trump said that the room loved him. The pastor might have been terrible but the audience was with him.

"From the perspective of people in the audience, they were yelling at him the whole time," Reid said, mentioning some of the first-person videos from audience members posted on Twitter. "The pastor saved him. The last thing that was really literally screamed at Donald Trump as he was run out of that room, uncomfortably, was, do you admit that president Obama was born in the United States."

She explained that the issue is important to African Americans because it was an attempt by Trump to "humiliate the first black president of the United States. To make him show his papers as if we were in Apartheid South Africa. It's one of the reasons African-Americans are opposed to Donald Trump even though he is doing this pinball thing where he is trying to pull in African-Americans by turning them against migrants of Hispanic origins."

Reid noted that when Trump actually makes it in front of black audiences he gets negative reactions or no reaction, which is not what he's accustomed to dealing with.

"I think what you are going to start to see is let's attempts to listen to those advisers and put himself in those rooms," Reid said. "Donald Trump turns around and makes a completely different story about what happened for a white audience when he goes to Fox News, which has a tiny African-American audience. He can confidently boast that the room loved me and that pastor was horrible."

Reid remarked that Trump actually backed down in the presence of the pastor in Flint. He didn't talk a big game or assert himself, he backed down.

Check out the full and fascinating video below: