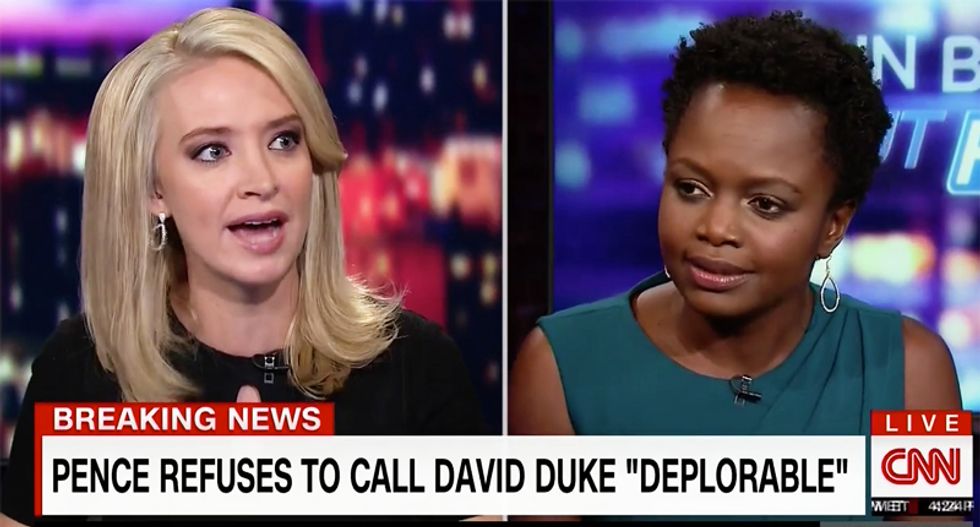 Appearing on CNN's Situation Room, Pence refused to call Duke "deplorable," by begging off and saying, "I’m not in the name-calling business."

Asked about his refusal, CNN commentator Jackie Kucinich laughed, saying, "Of course David Duke is deplorable. Of course he is! He's a KKK member! I don't understand how questions like that don't have immediate answers."

McEnany, who looked like she was about to fly out of her seat, immediately jumped to Pence's defense, saying the Indiana governor renounced the avowed racist's support during the interview.

"Anyone who wants to mischaracterize Mike Pence, who is a man of upstanding resilient incredible character, he is not that," she told the panel before playing the 'Robert Byrd was in the KKK' card, saying, "I'm still waiting for Hillary Clinton to renounce her support of Robert Byrd who was a KKK Grand Dragon in his own right."

Former Martin O'Malley campaign manager Karine Jean-Pierre tried to get a word in edgewise, telling the Trump advocate that Byrd apologized for his involvement with the Klan years before he passed away.

"Here's an opportunity for the Trump campaign, once again, to disavow David Duke," Jean-Pierre explained.

As McEnany complained that Trump had separated himself from Duke, Jean-Pierre shot back, "No. He didn't even know who he was! You know that should disqualify you from running for president, if you don't know who David Duke is. Period."

The Trump spokesperson immediately went off on a rant claiming Clinton's reference to Trump's "basket of deplorables" disqualified her for the presidency because she insulted half of America.