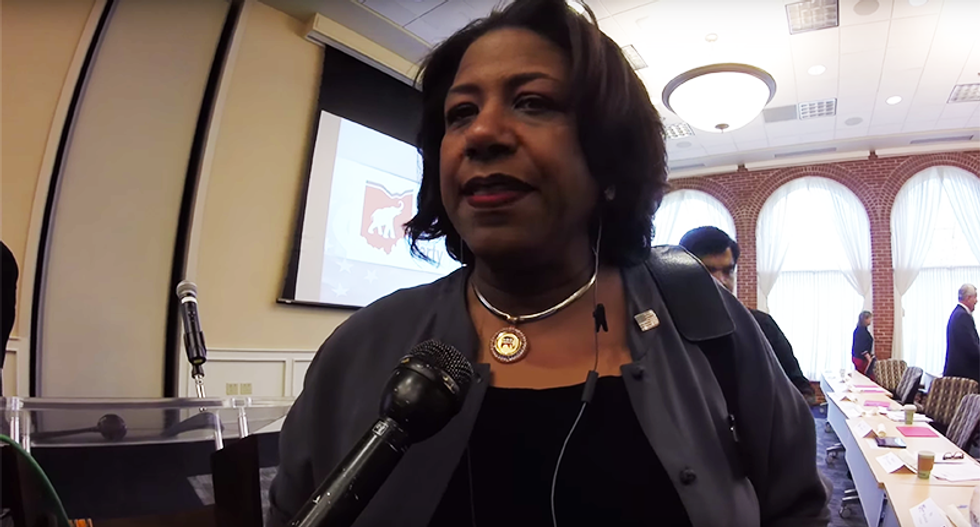 When Donald Trump’s campaign chair in northeast Ohio went viral after blaming President Barack Obama for racism and crime in black neighborhoods Thursday, it created an opening in Mahoning County.

Ironically, that job now goes to Tracey Winbush, a fierce opponent of Donald Trump before his official nomination to be the GOP's presidential candidate. According to The Guardian, Tracey Winbush is on record saying she has previously been “offended as an African American” by Trump and admitted in the past she had “bashed the crap out.” Winbush is also on record saying that she believes Turmp has “denigrated the Republican party.”

The Trump campaign made the announcement that Winbush was their new chair on Thursday after previous chair Kathy Miller resigned.

Then the obvious, Winbush signed up for a service that automatically deletes all of her tweets. The service notified people following her that it was deleting all 17,000-plus of her tweets:

As if that isn't strange enough, Winbush then tweeted out that her 2:43 p.m. tweet was her first.

Winbush also made a speech in April to the Ohio Republican Party in which she reminded her audience she "bashed the crap out of Trump for the last five months, six months, nine months" on her radio show. “And my listeners are going to kill me if I say anything positive about him.”

Winbush's "second tweet" talked about how blessed she was to be working to help elect Trump.

I look forward to serving the Mahoning Valley For @realDonaldTrump Campaign. What a blessing
— Tracey Winbush (@Tracey Winbush)1474570099.0

She continued in her April speech, “There are those of you in here who are supporting a man, at the top of the ticket, who has denigrated the Republican party like I’ve never seen before.”

Winbush even told her fellow Republicans she “could never support a candidate because of the way he has handled himself.”

A reporter asked her after the speech about the fractured primary and how the party can repair that. She asserted, “I don’t like Trump,” she said. “I don’t like Hillary more.”

Winbush's radio show talked about her new candidate lying about his endorsement from David Duke and support from White supremacist groups like the KKK and Aryan Brotherhood. One Feburary 2016 show description reads, “His response on the Sunday Morning talk shows was deplorable and his statement this morning on NBC was even worse. He thinks the American people are stupid and especially me, cause I listen very well and can hear.”

In March her radio show explained, “KKK endorsements are not what the Republican party needs. Racism is always a downer except if you’re Trump I guess.”

Winbush responded to her deleted 17,000-plus tweets by saying that those tweets were "not for you to read."

That prompted questions about Clinton's deleted emails, which Winbush's candidate has criticized Clinton for.

Check out the videos of the new Mahoning County, Ohio Republican Party chair discussing her party's nominee below: