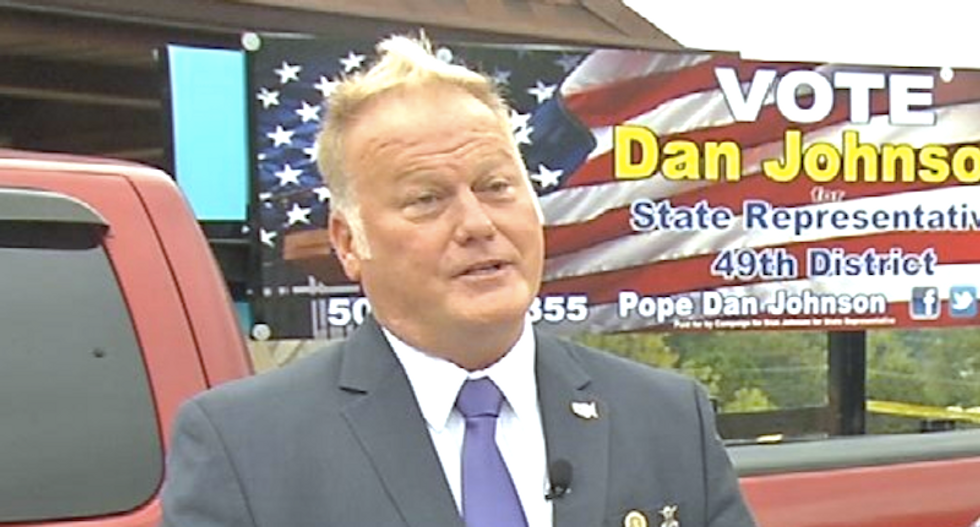 Johnson, who is also bishop of the Heart of Fire Church in Louisville, frequently shares Confederate flag images and has called for states to ban the practice of Islam.

The candidate, whose church boasts on a sign that it's "not politically correct," asked a TV reporter exactly which of his Facebook posts could be considered offensive.

So the reporter showed him posts that showed the Obama family with ape-life features added to their faces, and another showing Ronald Reagan nursing a chimpanzee identified by a caption as Obama as an infant.

A GOP county chair in Colorado resigned earlier this year for sharing the Reagan-chimp social media image, and a Pennsylvania mayor is being urged to step down over his own racist Facebook posts.

Johnson explained that he just considered the images to be light-hearted amusement.

“It wasn't meant to be racist, I can tell you that -- my history's good there," Johnson said. "I can see how people would be offended in that. I wasn't trying to offend anybody, but, I think Facebook's entertaining."

He considered images comparing the nation's first black president to a monkey no different than what any other president has faced.

“I looked this up -- there has been no president that hasn't had that scrutiny, not one," Johnson said. "I think it would be racist not to do the same for President Obama as we've done for every other president.”

He defended his flurry of Confederate flag posts to be a celebration of state's rights, and complained that conservatives were under attack for supporting the constitutional rule law, and then argued that Muslims should not be allowed to practice their religion.

“My thing for Islam, if you want to be in America, be an American," Johnson said. "The thing about all religions in America, they don't oppose America or want to destroy America, or some way or another get us to take on another law, like Sharia law. I hate that."

Johnson insisted that he's not racist -- but he's also not sorry.

“I love America, I love people," the GOP candidate said. "I believe red, yellow, black and white, all are precious in God's site. I'm not a racist.”

"They represent the rankest sort of prejudice present in our society and do not in any way, shape or form represent the views of the Republican Party of Kentucky or the many fine candidates representing us on the ballot this November," said Mac Brown, the state GOP chair.

Johnson said he's willing to lose the election over his Facebook posts because sharing those images -- most of which he deleted before apparently deactivating his account -- were just too important to his self-expression.

“I want to be myself," Johnson said. "I would rather be myself than be elected as state representative of the 49th.”