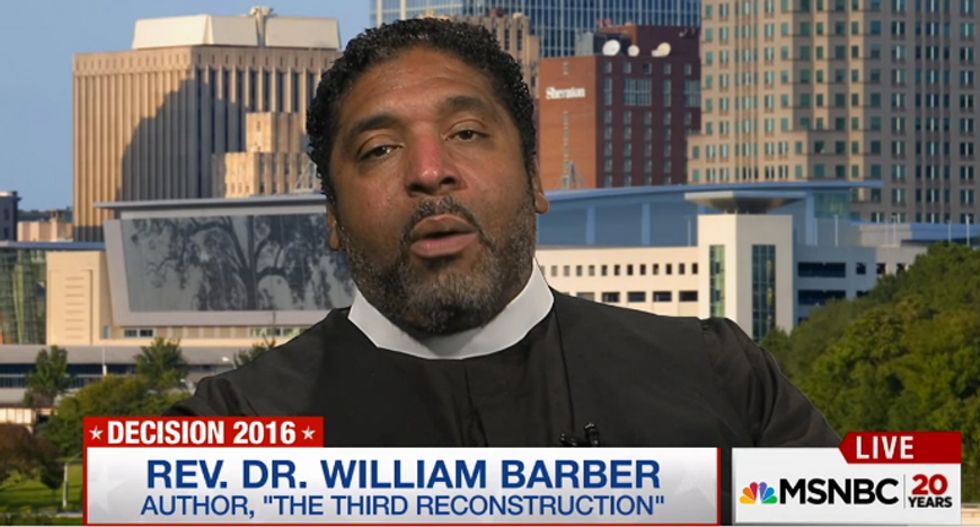 North Carolina NAACP chair and civil rights activist Rev. William Barber noted on MSNBC's "Hardball" Thursday that Trump delivers one message to white communities about African-Americans and an entirely different one to communities of color.

In a discussion about the recent shootings of Terence Crutcher in Tulsa, Oklahoma and Keith Lamont Scott in Charlotte, North Carolina, fill-in host Steve Kornacki remarked that Trump received backlash from the police community after endorsing him for president. "Was she choking?" Trump asked of the female officer who shot and killed Crutcher.

When asked what his reaction was to hearing from Trump this week, Barber outright called Trump hypocritical.

"There's so much hypocrisy and insult in what Donald Trump said," Barber began. "He is a man who has inflamed racial tension, applauded members of his rallies, who have actually hit African-Americans. He has joined in this narrative that somehow, to be against racial injustice and against racism engaged by police is to, in fact, be anti-police, when, in fact, the black and the white community that is also marching with black lives matter and the NAACP and the latino are not anti-police, we're anti-bad police."

Barber went on to clarify that even good police are also against bad police officers who commit acts like we've seen this week and over the last several years. "Because it makes it bad for all good police," he continued.

Recalling the way Trump began his campaign, Barber remarked that there has been a concerning thread of racism throughout the last year.

Barber went on to call Trump "exactly the wrong one" to deliver any message to the black community based on his track record. "And even today he floated frisking, when in fact, frisking has been found -- not frisking, excuse me, profiling, and stop and frisk, has been found unconstitutional, and not effective. So, actually, his proposals alone -- we need trust, we need transparency, we need better training, we need more than just discussion about racism, we need racial transformation."

When it comes to the killings over the last few days, Barber said that the power given to racists so far too much. "We need to understand something, this is very simple, and that's why you see black and white people together with these protests. A badge and a gun, the ability to serve a warrant and take a person's family member out of their house. The ability to use lethal force is too much power for a bigot, for someone that is trigger happy, and for someone that does not understand that their first role is to protect and serve, not to shoot and kill."

Check out the full interview with Rev. Barber below: