Stephen Colbert hilariously shreds Trump’s birther lies: ‘We’re not crazy — we were there’ 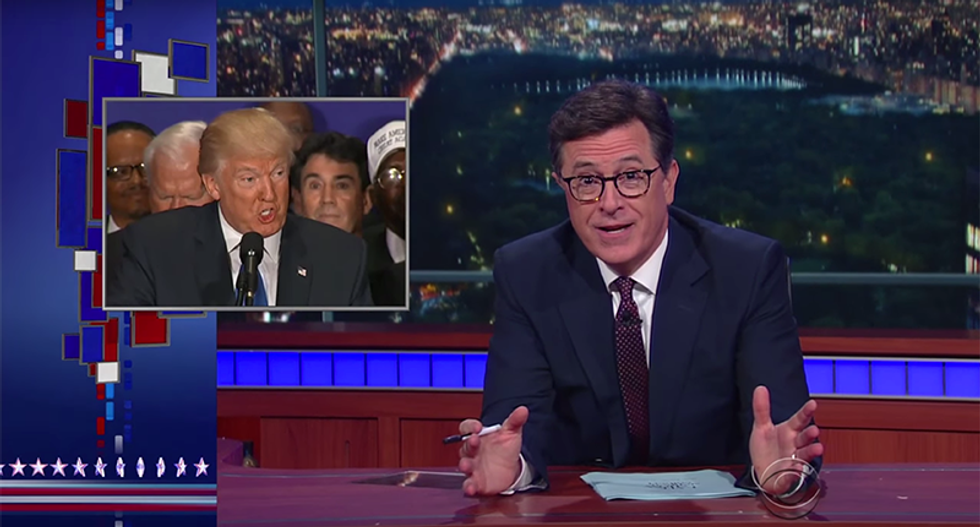 It's been less than a week since the belated admission from Donald Trump that he believes President Barack Obama was born in the United States. Yet, despite Trump's birther defeat being five years in the making, the victory was more bizarre than triumphant.

“That’s what’s called a firm grasp of the obvious,” he called Trump's declaration that Obama was born in the U.S. “Next I assume he’s going to announce that water is wet, that bears poop in the woods, and that Donald Trump is not qualified to be president.”

But in an act of habitual finger pointing, Trump blamed Hillary Clinton for his track record of racist claims.

"That claim seems a little suspicious," Colbert said. "If I didn't know better I'd say you are a," he paused trying to find the proper word, before playing a clip of Trump saying "world-class liar."

Trump claims he “finished” the conspiracy back in 2011 when President Obama released his long-form birth certificate. Yet, in video after video of interviews that followed as late as the 2015 GOP debates, Trump was still making his birther claims.

“No you didn’t,” Colbert said of Trump's victorious finishing. “And I know you didn’t, because I was alive and on TV.” Colbert was primed and ready to go with videos, "Maybe I remember it one way and Donald Trump is a liar."

The most alarming claim from Trump was "I finished it, and you know what I mean," which caused Colbert to exclaim in frustration. "No, I don't! No one knows what you mean!"

Obama released his birth certificate in 2008 but Trump demanded the long-form. So, Obama released that in 2011. Trump then called it a forgery, calling it "Israeli science" and announced he was sending investigators to Hawaii. Strangely, this team of investigators was never seen nor heard from again.

Trump was so convinced he was right that he demanded other documents from Obama like his college applications and passport. He even went so far as to claim he would donate $5 million to the charity of Obama's choice if he released the documents.

Colbert remembers this part of the controversy because that was during his Super PAC days — when he offered $1 million if Trump would allow the talk show host to dip his balls into his mouth.

“Now, for some reason, Donald, you did not take the deal,” he said. “I'm going to guess it’s because your mouth was already full of Vladimir Putin's balls.”

Colbert's lesson is that Trump doesn't “get to flog this issue for five years and then act like you’re correcting everybody else! We’re not crazy, we were there. We all saw you do it. Even the people who support you saw you do it — it’s why they support you!”

And like many of Trump's contractors and business relationships, Obama is probably waiting for that $5 million check.

“So, Mr. Trump, now's your chance to put your money where your mouth is,” Colbert said, “or, barring that, there's always my balls.”