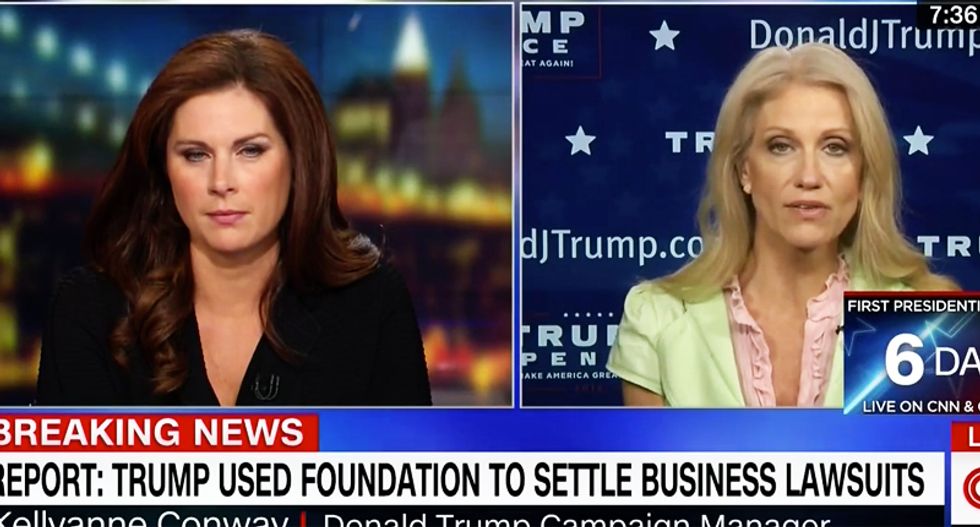 Appearing on CNN with Erin Burnett, Donald Trump campaign manager Kellyanne Conway attempted to sidestep questions over the GOP presidential candidate using his foundation to pay off $258,000 in lawsuits -- as reported in the Washington Post -- before being cornered and blurting, "There's are many lawsuits."

Covering a wealth of issues that have cropped up for the Trump campaign in the past few days, the Trump campaign manager -- who acts more like as his  spokesperson -- dismissed the WaPo report by using the article's use of the expression "may have" when it discussed illegality in the payments.

Conway then attempted to spin the payment as "classic Donald Trump," stating the money was attached to a charity benefiting veterans.

"He wanted to raise the American flag as high as he could over Mar-a-Lago," she explained. "I think a lot of Americans would appreciate that."

Host Burnett didn't let her off the hook, noting that an attorney with extensive experience in non-profits called the lawsuit payoffs, "as blatant an example of self-dealing as I have seen in awhile."

"The idea that money went for -- when people hear 'self-dealing,' Erin, you know what they think of immediately," Conway parried. "That it's going for plane rides and fancy hotels and expensive meals and certainly salaries and overhead, and that sounds to me like the Clinton Foundation," before Burnett cut in.

After Burnett pointed out that that Trump's personal business benefited by the foundation using other people's money to pay off lawsuits, Conway professed confusion.

"Well there are many lawsuits everyday against people," Conway said said before becoming accusatory. "That's a bridge too far, I think you're making things up not based on facts not reported in this story that uses a lot of conditional phrasing"

According to a USA Today report in June of this year, Trump has been involved in over 3,500 lawsuits.