'I have never heard boos like that’: ‘CNN rips ‘over the line’ Trump for #AlSmithDinner speech 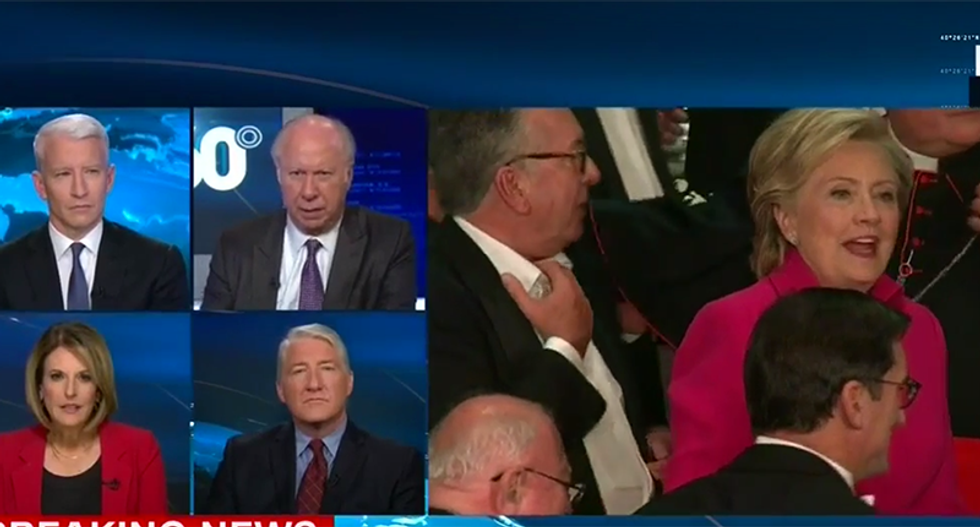 Donald Trump had a bad night at the Al Smith Dinner in New York, Thursday night. Not only was he the first presidential candidate to get booed by a room full of priests, he disgusted the CNN panels that followed.

Pundit David Gergen noted that he has never once heard booing at the event before. Trump brought a new first in the 2016 campaign.

"You know, the other part of this that, I think, distinguishes the two is that at the end, she had this statement," Gergen said. "It was about unity and about respect and linking it back to Al Smith. That's much more the traditional -- you know, you do the humor, but at the end you get serious. And you deliver a more emotional pitch. And she had that. And I think that helped -- I think it evaluated what she had to say. And he did not go there."

John King noted that Clinton talked about her faith experience where Trump did not. While the right-wing and religious right ignores Clinton's faith, she has talked openly about the importance of her faith to get her through tough times in the late 1990s.

Clinton surrogate Christine Quinn has been to the event at least half of a dozen times and noted "I have never heard boos like that. Never. And that's with the presidential nominees speaking, that's with the president speaking, that's, you know, military and other leaders speaking. Sometimes people aren't funny, you know, and then it's like, come on, let's speed it along, but I've never heard that before."

She also said that she's never heard a presidential candidate give a "full-throated attack their opponent." Typically, candidates make jokes but never like this and the evidence it was inappropriate came with the expressions of the people around Trump. "I think if you look -- saw the look at Cardinal Dolan's face when it happened it was clearly shocking to him and everybody else there because that's simply not what's done and people may say Donald Trump's was untraditional, but it's that man's standards. He kind of sets the rules but if you don't follow them, don't come and act in a manner of aggressiveness that is not in the tone or tradition of that dinner."

While Trump surrogate Jeffrey Lord thought they both did well for the first time possibly ever, Lord had something negative to say about Trump, calling his remarks "a little too sharp." Lord also claimed that most people in America will wake up tomorrow and not know anything about the event or care. As he was saying that, #AlSmithDinner was the number one Twitter hashtag with several thousands of people talking about the night. Lord also discounts the importance of the night and the role it plays for the Catholic church.

Philip Bump, political reporter for the Washington Post, explained that there might not be many people thinking about the event but that it plays into a larger narrative about Trump.

"Donald Trump's main challenge is temperament and this isn't just the thing Clinton has put forward," Bump said. "In the Washington Post/ABC News poll he's seen as not qualified by more than half of the country, and the reason why, the Quinnipiac Poll, they're afraid of his temperament. This was an easy thing for him to do, and quite frankly, he blew it, and he needs to reinforce over the course of the next 19 days."

Trump's surrogates came to his side claiming that Trump didn't blow it, but the booing confirmed it according to the others on the panel.

"Jeffrey, with all do respect, he did blow it," Quinn cut in. "No one gets booed at that event, you are not supposed to at that event -- it is clearly known -- attack aggressively -- your opponent that is -- not the dinner that Al Smith and the Cardinal hold. If you don't want to abide by those rules don't come."

Lord said that it was meaningless because it was a room full of rich people wearing white-ties and tails.

"It's not about that. It's about how one behaves and if you're invited to an event," Quinn said. "In the same way, it was odd Ted Cruz came to the convention and didn't endorse the nominee, it's just bizarre."