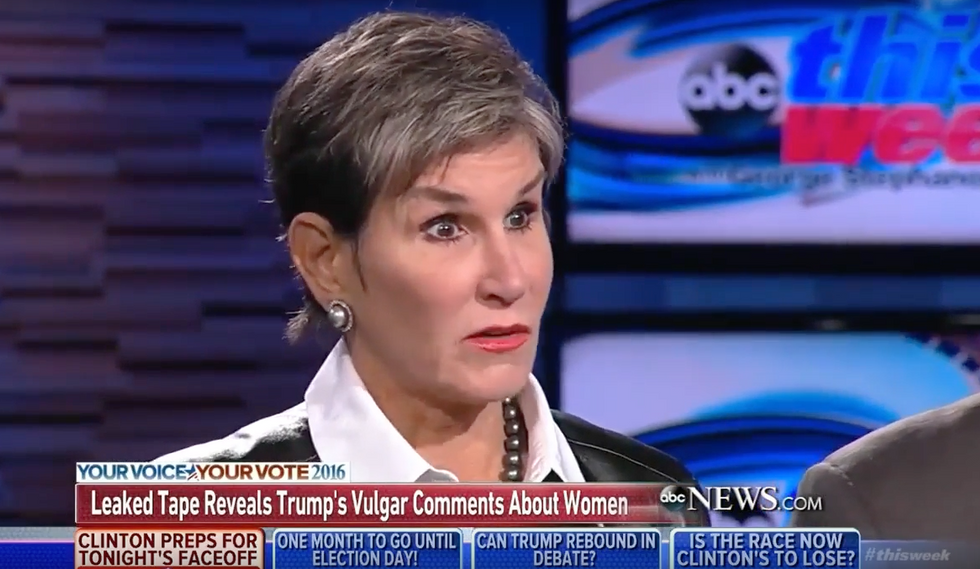 After GOP nominee Donald Trump's "grab them by the p*ssy" moment was revealed on Friday, conservatives are mustering up what's left of their troops in an effort to keep their party afloat.

Some — like Rudy Giuliani — are unconvinced that Trump bragging about sexual assault is anything that needs to be examined further, and that voters need not consider the comments when heading to the polls in the coming weeks.

This Week panelist Mary Matalin echoed Giuliani and suggested that Trump was simply caught talking about "sex he's not getting" and noted that there are more important things to consider while voting than the "Venezuelan tart," as Matalin describes former Miss Universe Alicia Machado.

Machado spoke out against Trump after the first presidential debate on September 26. She said that when she was Miss Universe, Trump would call her "Miss Piggy, Miss Housekeeping, Miss Eating Machine."

Following Machado's statement, Trump said in a phone interview on Fox and Friends, "She was the worst we ever had. She was impossible ... She was the winner and she gained a massive amount of weight and it was a real problem."

Is it really not that big of a deal for Trump to repeatedly insult, harass, and assault women? Should that not be something that voters take with them to the polls?

Many Republican leaders are dropping their support from the Trump campaign — specifically, 75 top Republicans have expressed disapproval over their nominee and more than 24 others have called for him to drop out.

While Matalin might think the "Venezuelan tart" should not be someone voters consider this fall, it seems that Trump's "I moved on her like a b*tch" comments might finally be enough to sway Americans against the real estate mogul.