Stephen Colbert: 'Trump is no longer accepting the polls — or reality' 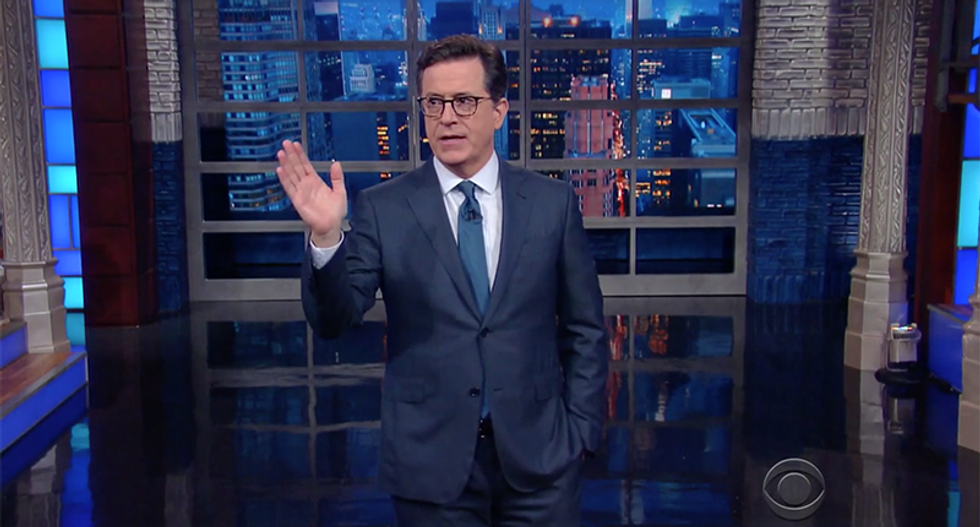 Republican presidential candidate Donald Trump is having another bad week. After weeks of bad publicity, more and more sexual assault accusers coming forward and disastrous debate performances, he had yet another one Wednesday night. The debate was so bad, in fact, that Stephen Colbert simply can't stop talking about it. The result of the ongoing nightmare is that "Trump is no longer accepting the polls. Or reality," Colbert joked Thursday night.

So, last night when moderator Chris Wallace asked Trump if he'd be accepting the results of the election, Trump said that he would keep the world in suspense. "Yes, suspense," Colbert said. "That's presidential. It reminds me of FDR's first inaugural." He then played old black and white footage of the inauguration. Dubbed over FDR's actual words, however, was someone saying "The only thing to fear is... Stay tuned to find out!" Dramatic music was then played. "Spoiler alert: It was the Nazis," Colbert revealed.

"Now, a lot of people say not promising to accept the results disqualifies Trump from the presidency," he continued. "So, today, Trump assured voters that he believes in the peaceful transfer of power." Colbert then played the video of claiming he'd only accept the results if he was the winner.

"Oh, come on!" he said to the audience's reaction. "You've got to give it to him! You know, you really got me for a second there! I actually believed you had a shred of integrity. What an amazing psych-out. It's like that classic joke where you offer to shake somebody's hand, but when they go to shake it, you undermine our system of government."

He wondered how America got to this point. We're in the unique place in the historic American experiment when our government "rests in Donald Trump's tiny, whining, loser hands."

In the end, Colbert said it was like Trump didn't prepare for the debates at all. Reports say, however, that Trump did debate prep with Chris Christie playing the role of Clinton. "So, Trump was ready, if Hillary started weeping quietly while she handed him his McDonald's order."

Watch the full hilarity below: