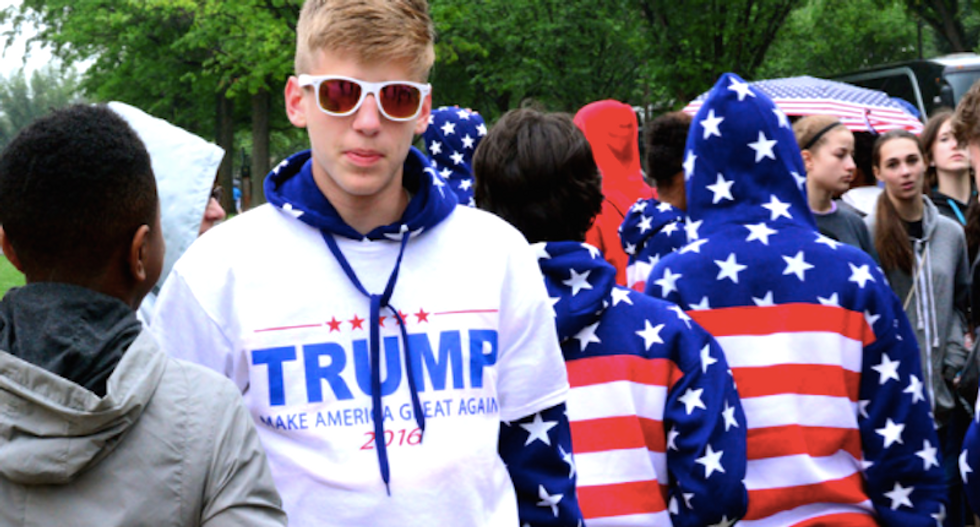 However, Breitbart failed to comment on the 400-plus incidents of racist, sexist, and xenophobic violence reported by the Southern Poverty Law Center that have struck communities across the country since the election. Most often, these incidents have occurred at the hands of people who feel emboldened by Trump's victory.

Breitbart reported on a few incidents, one which occurred in a New York City subway that the outlet described as "thugs [making] strangulation great again." The outlet noted that a 24-year-old wearing a Make America Great Again hat was targeted, and choked on a subway platform.

It noted nine other incidents, including one in which a 21-year-old was allegedly assaulted outside of a Boston bar.

SPLC has been recording the many instances of violence that have targeted black people, immigrants, the LGBTQ community, Muslims, and women. These incidents have occurred in states all across the country.

A sampling below from SPLC:

My boyfriend and I were walking down the sidewalk in Raleigh, North Carolina. It was 9:30 PM, and we were holding hands and walking to a restaurant for dinner.  A white car passed us and a white male in the back passenger-side seat leaned out the window and yelled, "F*cking f*****s!" at us.

A Latina woman in Texas shared,

I was walking my baby at my neighborhood park and a truck drove by with a male driving and a female passenger. The female yelled "white power" at us as they drove by and then sped away.

A 13-year-old Filipina American was bullied at an elementary school, also in Texas,

My 13 yo half Filipino daughter was approached by a child she didn't know as she waited to board her bus after school. The young man stated "You're Asian, right? When they see your eyes you are going to be deported" and he walked away. I reported this to my district Superintendent.

Raw Story has reported on various incidents as well, including the following:

A California woman with lupus who covered her head was mistaken for a Muslim woman. (Whether or not she is Muslim, the woman should not have been attacked.) She said someone smashed her car window and left a note that read, "Hijab wearing bitch this is our nation now get the f— out."

A black student at a Missouri high school was burned with a hot glue gun. White students at the same school reportedly also ordered black students to sit in the back of the school bus while chanting "Trump! Trump! Trump!"

A White Massachusetts man was threatened by a neighbor for having black friends. He received a note in his mailbox that warned him, "Natick has a zero tolerance for black people."

A woman who posted a photo of herself and Hillary Clinton — who she ran into while hiking — following the election later shared that she had received death threats from Trump supporters over the photo.

"This story needs to go away," she said. "It got a lot of positive feedback from a lot of people, but I don’t want this to add on to this (blowback), I don’t want to fuel the fire."