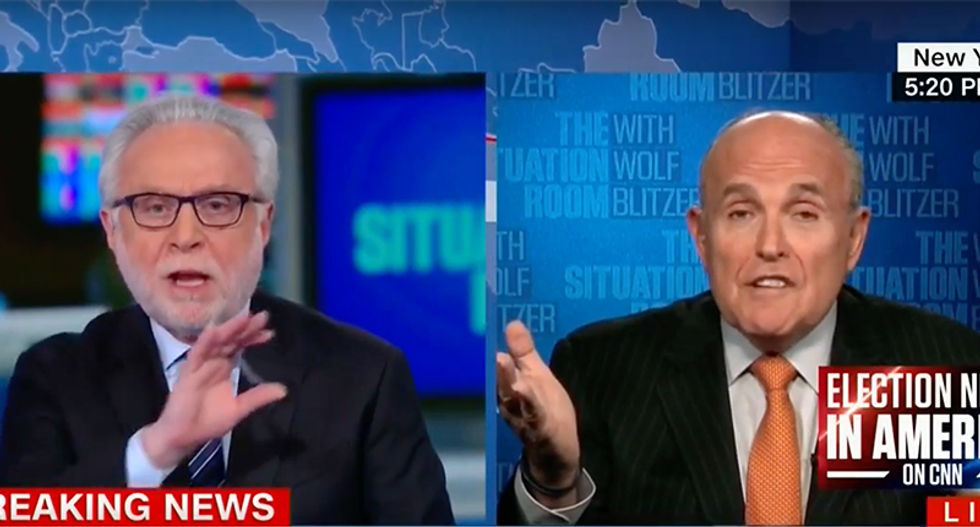 Wolf Blitzer just grilled Rudy Giuliani for the most uncomfortable 10 minutes of television. While Giuliani swore that he was giving the same information to everyone in each interview he's done, Blitzer couldn't help but notice that the stories didn't quite match up. The result was that Giuliani seemed to walk back an entire day's worth of interviews in just one appearance.

"No, I've spoken to no current FBI agents, gosh, in the last eight months, nine months, ten months, certainly not about this," he said. A few seconds later, he continued, "So, I've had lots of conversations with them and they have told me a lot about the -- I guess the disagreement between the Justice Department on the one hand and the FBI on the other. But it all comes from former FBI agents and it's all hearsay."

Blitzer cited the letter that two ranking members on the Congressional committee sent out that references an interview Giuliani gave this morning.

"This morning Rudy Giuliani, one of Donald Trump's closest and most vocal campaign advisers, appeared on national television and confirmed that he had obtained leaked information about the FBI's review of Clinton-related e-mails several days before FBI director James Comey sent his letter to Congress last Friday about this letter," Blitzer read from the letter. "In fact, Mr. Giuliani went even further and bragged about the information that he had obtained stating, 'Did I hear about it? You're darn right I heard about it.'"

Blitzer explained that the two Congressmen are alleging that Giuliani confirmed that he got the leaked information from the FBI in the morning interview.

Giuliani tried to deny it. "That's not correct. I've had no conversations with anyone inside the FBI. I have heard for the last four months a tremendous amount of information about the consternation within the FBI, the fact that FBI agents were very unhappy about the way they were being treated by the Justice Department," Giuliani said, admitting that those former FBI agents were delivering information about current information about what is happening currently in the FBI. "But none of it came from any current -- I haven't talked to a current FBI agent."

Blitzer was confused. "In the interview, this morning on 'Fox & Friends' you seemed to say, 'Did I hear about it? You're darn right I heard about it.' What were you referring to?"

Giuliani swore that it was more about the revolution brewing within the FBI against the Justice Department. In fact, he admitted it was a total surprise to him that Comey's announcement came. Then in the next breath admitted it wasn't a surprise.

"Except to the extent that maybe it wasn't that much of a surprise because I had been hearing for quite some time that there was a lot of, I don't know how you would describe it, maybe revolution is too strong a word, but a lot of debate and anger within the FBI about the way they were being treated by the Justice Department and a lot of FBI agents feeling that the Justice Department had been corrupted," he claimed.

Giuliani tap danced around the issue like you wouldn't believe. Check it out in the video below.