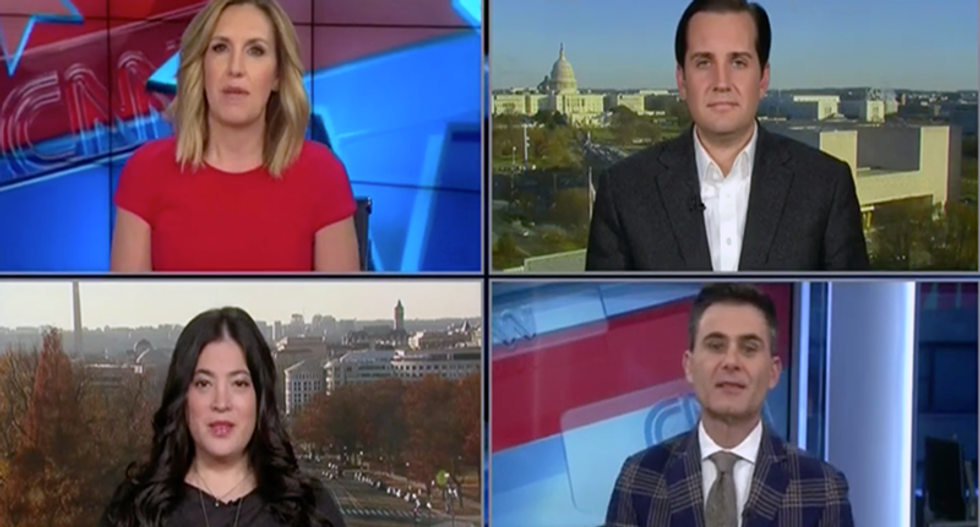 Andrew Bauer seems to be trying to have it both ways when it comes to the alleged hacks on behalf of the Russian government.

In a Saturday afternoon interview, CNN's Poppy Harlow was shocked that Bauer was defending President-elect Donald Trump's words, which she said was an insult to the intelligence community.

"He is challenging what he thinks isn't right. There are a lot of bureaucrats there," Bauer said about the intelligence agencies. "A lot of folks feel like this is the same old same old. Nobody is going on record. These are unsubstantiated allegations."

Harlow was confused how Bauer could claim that he was strong on national security while simultaneously towing the line for the Trump administration. She asked him how claims could be considered "unsubstantiated when the 17 intelligence agencies of the United States have come together and briefed Congress in the last week and said, 'This is what we have found?'"

Bauer claimed that among the agencies there is a lot of disagreement and that they've struggled to collect viable information on Russian President Vladimir Putin. He continued, saying that the RNC was not hacked and if the CIA believes that the RNC was hacked that they should essentially prove it.

"Many people would disagree with you," Harlow said. "Do you believe that President-elect Trump is right to say it is time to move on? Do you want to see the next president dig on this?"

Bauer, again, tried to have it both ways, saying that he wants to see Americans move on but that if there really was proof that the Russians hacked America we should get to the bottom of it.

"Those two statements are antithetical," Harlow explained to Bauer. "Either we move on or we get to the bottom of it."

"No, Donald Trump has, I think, kind of stayed the same course," Bauer explained. "A lot of his folks want to go after Hillary Clinton. He said, 'nope, we need to move on.' I think, he has maintained the same throughout. We are not going to continue to go after some of these issues that were campaign issues, I want to move the country forward. If the United States Senate and House think that, in fact, there was meddling, within the Russian government in our politics, then, yes, we should engage them. Donald Trump is trying to work on what he proposed, what he ran on and moving forward."