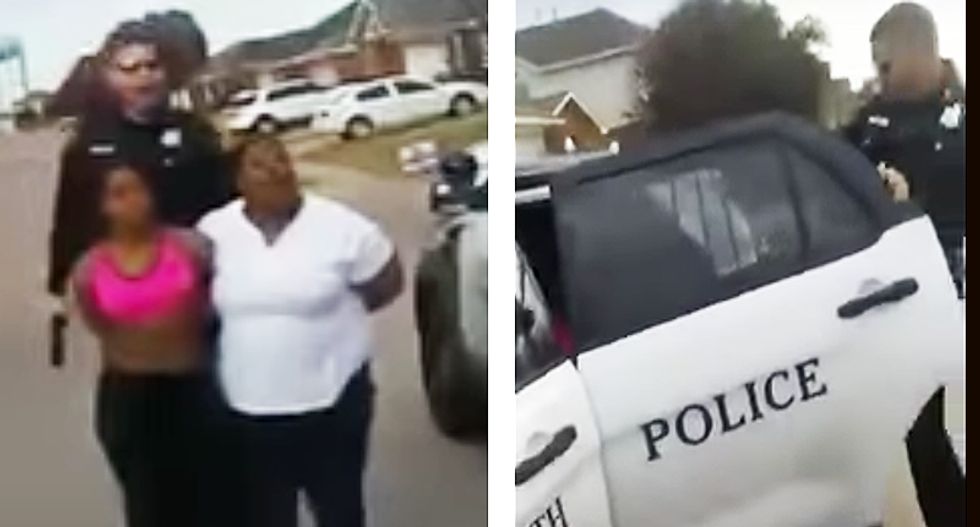 When a white Fort Worth police officer wrestled Jacqueline Craig to the ground and handcuffed her for complaining about a neighbor who allegedly assaulted her son, the video of the incident was 11-minutes long. Today, the full 23-minute was released by Porsha Carver, who initially posted the first video on Facebook.

The extended clip shows what happened after the arrest, when Craig's 19- and 15-year-old daughters were also arrested by the officer, the Dallas Morning News reports.

The new video doesn't show anything that isn't already known about the incident. However, it might provide police with information needed for their internal investigation into the officer's behavior, the department told KDFW-TV.

The video shows Craig making the initial 911 call to report the incident. While they wait for the officer, the man who allegedly assaulted Craig's 7-year-old is painting a fence. The dispatcher asks Craig if she had called before and she answers that she has not. She then asks the dispatcher why the officer hasn't yet arrived.

(READ MORE: ‘I wanted to smack him myself’: Ex-NYPD detective unloads on Texas cop who arrested Jacqueline Craig)

"I want to press charges," Craig is heard on video saying. "This is a grown man. He grabbed a 7-year-old kid and choked him."

At approximately seven minutes into the video, another man known to Craig arrives and confronts him. He orders the man to keep his hands off the boy before driving away.

About 12 minutes into the video, the officer arrives and speaks to the man accused of the assault. The officer is then seen wrestling Craig to the ground and arrests one of her daughters. At the 15:30 mark, the officer is seen trying to get one of the daughters into the car and kicks her. He sees Carver filming the incident and takes the phone from her but neglects to turn it off.

At the 20-minute mark, the officer asks Craig's 15-year-old daughter who was kicking his door. "Was that you?"

The officer, seems to confirm that he kicked her by saying, "Yeah."

"You kicked me on my side," she says.

The police department is conducting an internal investigation into the incident.

Craig's attorney said "racism is all over the video."