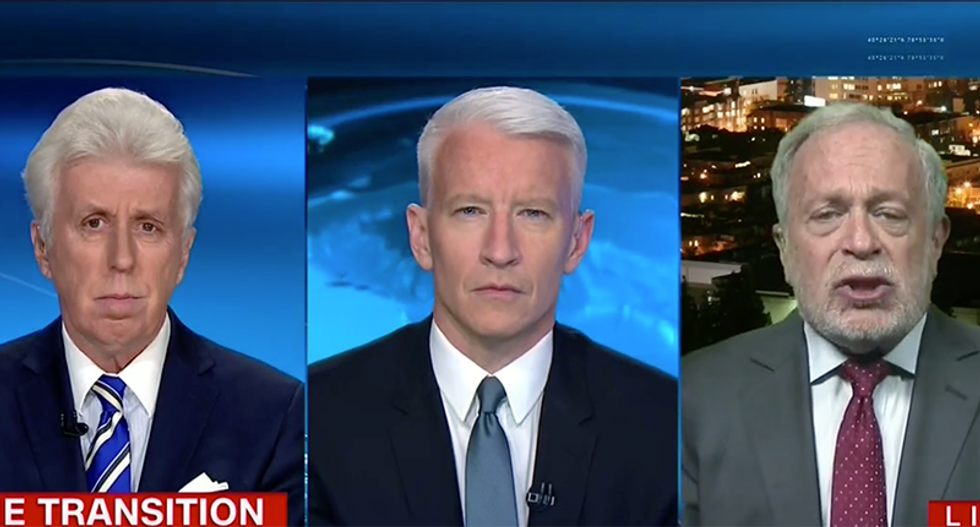 Robert Reich hit back against neo-con Jeffrey Lord on CNN Friday evening when Lord attempted to claim that Trump's new Goldman Sachs cabinet secretaries are nothing more than brilliant businessmen.

"There is a fundamental misunderstanding what's happened for the last 35 years," Reich told Lord. "Donald Trump, remember, campaigned against Wall Street, again and again. He accused Hillary Clinton of being too close to Wall Street. He actually put right there in the center of his opposition to Wall Street a firm called Goldman Sachs. And what he's doing is not only putting a lot of Goldman Sachs and Wall Street people into his administration, but he is taking a position that is completely contrary to his notion of being the tribune, the voice of the forgotten worker in America."

Reich explained that the "forgotten worker" is likely going to be even more forgotten moving forward due to these people Trump is nominating.

Lord attempted to return to Trump's talking points during the campaign about Clinton and Goldman Sachs, but the campaign is over and Trump must justify his actions.

"Jeffrey, now the president of Goldman Sachs is set to be named as director of the National Economic Council, just the latest from Goldman Sachs," Reich told him.

Lord tried to make the case that the Goldman staffers would be taking their cues from Trump but Reich called the claim "frankly absurd."

"I've served in four national administrations," he told Lord. "I was in the cabinet of Bill Clinton. I know how economic policies are made. A president gets advice. A president depends on advice. From the Treasury Department. The secretary of the treasury, and also the head of the Economic Council and who are these people going to be for? Donald Trump? They are both going to be from Goldman Sachs."

Lord explained that because Trump won he can essentially do whatever he wants.

Reich agreed, admitting that elections have consequences but that isn't the issue that he found concerning. It's the hypocrisy that Trump now presents as he turns to Wall Street after promising working people he was their guy.

"The issue is he ran as a working class populist," Reich said. "He ran as someone who said, 'Look all of these big corporations, Wall Street, Goldman Sachs, these basically shafted you. I am therefore going to be your voice. You have been forgotten for the last 35 years. I am going remember you. I'm going to give you voice.' And what does he do? He turns around and staffs the entire administration with the same people who have given no voice -- basically forgotten the working class."

Check out the discussion below: