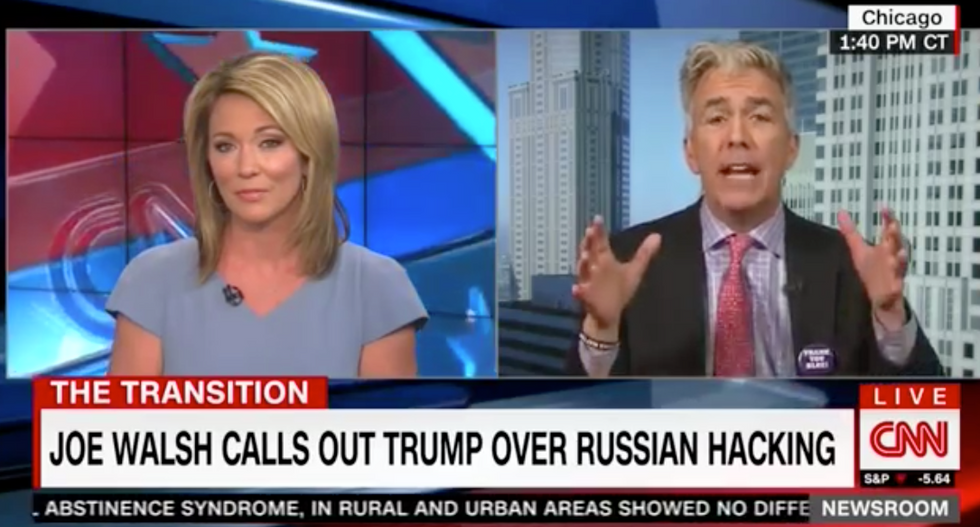 Former Republican Congressman and prominent conservative radio host Joe Walsh slammed the president-elect and fellow Republicans Monday over their lack of interest in investigating Russia’s attempt to influence the election in favor of Donald Trump.

“I’m outraged at the lack of outrage, especially on my side, the Republican side,” Walsh told CNN’s Brooke Baldwin. “I get that the country is divided, but my god: a foreign government interfered with our election. That should piss everybody off.”

Walsh iterated several of the talking points he made earlier Monday on Twitter, ripping into the partisan reaction to the CIA assessment. “It’s like because our guy won, Trump won, we’re going to keep our mouths shut,” Walsh said. “I mean that’s just so wrong.”

Walsh argued there’s “no debate” that Russia attempted to influence the election in favor of Trump.”

“It’s a fact,” Walsh said. “And then for Donald Trump … to call it ridiculous and not believe it, he ought to be ashamed of himself.”

Referring to former CIA director Michael Morell’s suggestion that Russian interference is the “the political equivalent of 9/11,” Walsh said he agreed with that claim, adding Trump’s is “acting like a third grader” in his refusal to accept the intelligence community’s assessment.

“I don’t think he fully gets it, Brooke,” Walsh said. “I mean we’re Americans! This is a foreign government got involved in our election. I mean, I agree with Mike Morell, that’s like Russia attacked us.”

Discussing the Trump transition team’s statement Friday insisting CIA officers are “the same people that said Saddam Hussein had weapons of mass destruction,” Walsh said his attacks on the intelligence community are verging on treason.

“For Donald Trump to come out and attack our men and women in the CIA, that’s almost treasonous,” Walsh said. “Russia attacks us and Trump attacks the CIA. He ought to be the one calling for an investigation.”

Walsh, who revealed Trump blocked him on Twitter, issued a plea to the president-elect. "He's got to use this as an opportunity, I think, to bring the country together and lead an investigation," Walsh said.