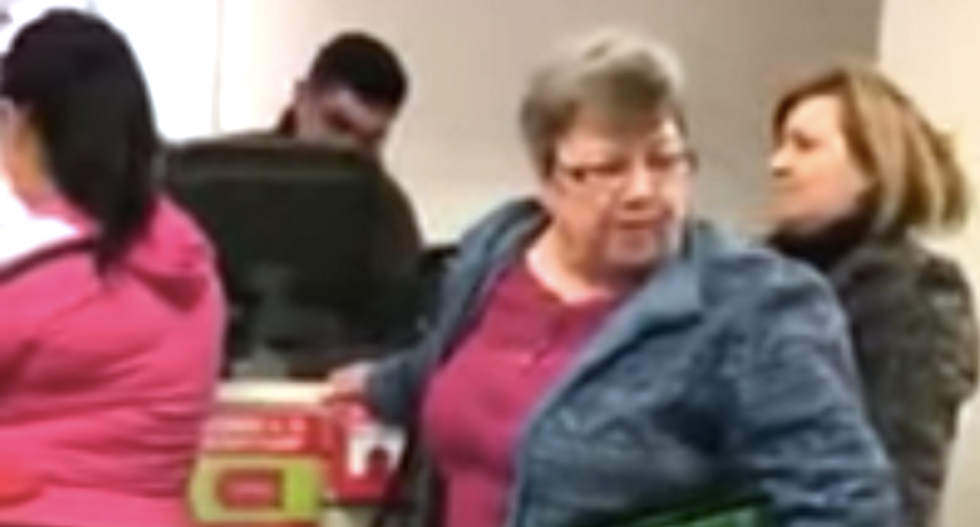 A shopper who verbally harassed two Hispanic shoppers has been banned for life from a Kentucky mall -- and she could also face potential criminal charges.

The encounter, which was recorded Tuesday and shared widely on social media and news outlets, shows a white woman in her 60s or 70s become angry after another shopper adds her items to a companion's order at the cash register.

“Just go back wherever the f*ck you came from,” she said, and then asked the cashier to intervene. “Tell them to go back where they belong. You know, they come here to live and they act like they’re everybody else. Get in the back of the line like everybody else does.”

None of the JC Penney employees or other shoppers ask the woman to stop yelling racially charged insults at the two Hispanic women, but Louisville's mayor and the county attorney have offered their help afterward.

"I am sad and disappointed to see conduct like this, when one person so dehumanizes another human being," said Mayor Greg Fischer in an email statement. "This is not who we are, and on behalf of our community, I apologize to the two women who were treated in such a horrible way. I hope this video prompts many discussions among families as they gather for the holidays this week – discussions about basic human values, dignity and respect. As a country of immigrants, we must understand that we only move forward through peace, acceptance and embracing those who are different from us. These are basic American values protected in our Constitution, values embraced in this welcoming, compassionate community."

The Jefferson County attorney asked the women to contact his office if they wished to pursue legal action, and he's considering filing criminal charges against the older woman.

“I personally denounce the intolerant actions of one woman at Jefferson Mall, and also feel that this incident could rise to the level of criminal conduct,” said Mike O'Donnell, the county attorney for Jefferson County.

The Jefferson Mall plans to permanently ban the woman who verbally harassed the other shoppers.

So far, the woman has not been publicly identified.