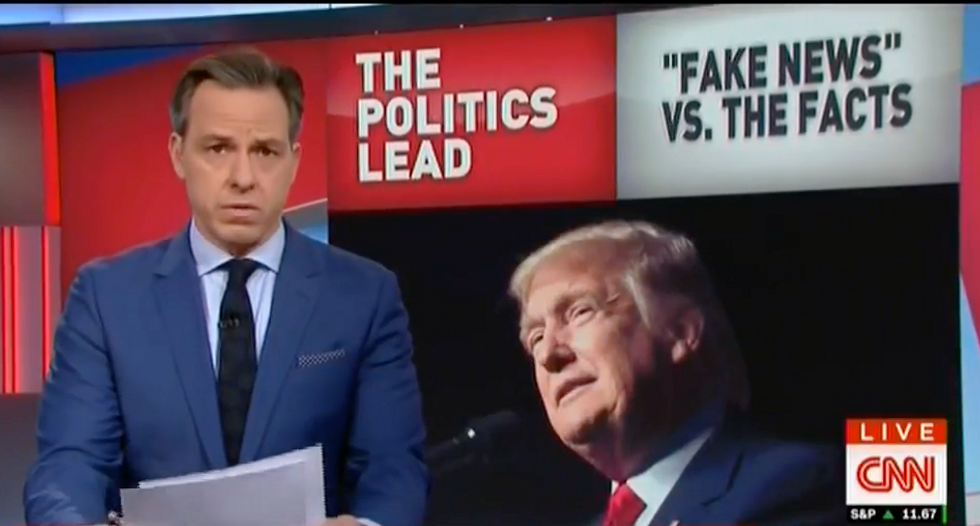 CNN’s Jake Tapper on Wednesday humiliated Donald Trump's claim that the barrage of negative news stories related to his administration are “conspiracy theories,” taking moment to explain to the president what differentiates a conspiracy theory from actual, real news.

Whereas Spicer said at a press conference Tuesday that Flynn’s resignation was “a matter of trust,” Trump today blamed Flynn’s firing on the “unfair” media reporting stories about Flynn’s contact with the Russian ambassador.

“The media, of course did not fire Gen. Flynn, President Trump did,” Tapper said. “Now what the media did do was reveal to the nation that Gen. Flynn had lied to the Trump team—including Vice President Pence—when he claimed he never discussed Obama’s sanctions on Russia with the Russian ambassador.”

“President Trump knew this at least as early as Jan. 26,” Tapper added. “But he did not act on this until media revealed the truth to you, and, as it turns out, Vice President Pence.”

The CNN host then turned to Trump’s twitter reactions about the ongoing Flynn saga, wherein the president blamed the negative reports on “conspiracy theories”:

“Of course these stories … are not conspiracy theories, these are news stories sourced by government officials,” Tapper explained. “Conspiracy theories are different, they’re false, they’re crackpot, they're nonsense."

“How do I illustrate what conspiracy theory is?” Tapper continued. “How about this one about Ted Cruz’s father,” he said rolling footage of then-candidate Trump claiming his former rival’s father was involved in John F. Kennedy’s assassination.

“That’s a conspiracy theory,” Tapper said. “Or how about this one, about President Obama,” he added, playing footage of Trump in 2011 insinuating that the former president was not born in the United States.

“THOSE are conspiracy theories,” Tapper said. “These are facts.”

The CNN host then turned to Trump’s hypocrisy regarding leaks. Though his administration is currently fixated on the historic amount of internal information coming from the White House, Tapper noted the president was more than happy to use leaked information to his advantage during the campaign.

“No president likes leaks … but it’s worth noting candidate Trump’s path to power was tread on a road of leaks,” Tapper said, playing a montage of the president praising information from WikiLeaks and the FBI that proved damning for rival Hillary Clinton.

“He didn’t have a problem with leaks then,” Tapper said, adding, “It’s not a moral position if you only hold it when it applies to you.”