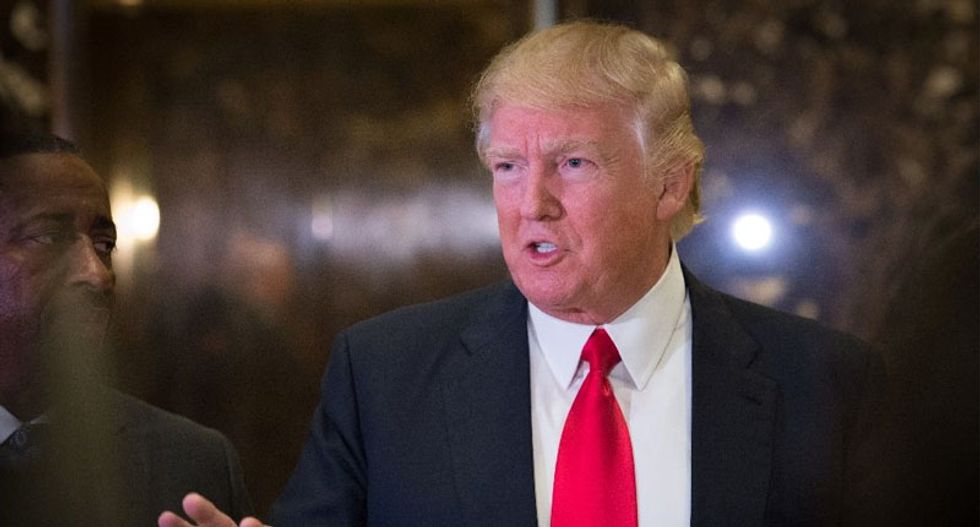 There has been a great deal of speculation in recent weeks about Pres. Donald Trump's mental health and a debate has sprung up among psychiatric professionals as to the ethics of discussing the chief executives wellness. After Trump's voluble, rambling hour and 17 minute press conference on Thursday, that speculation has acquired a new urgency.

On Friday, The New Republic published an essay by infectious disease specialist Steven Beutler who believes that Pres. Trump may well be suffering from dementia but that the cause could be clinical rather than psychological.

"Physicians like me have also taken notice of Trump’s bizarre, volatile behavior," Beutler wrote. "Given our experience, we can’t help but wonder if there’s a medical diagnosis to be made. After all, many medical conditions exhibit their first symptoms in the form of psychiatric issues and personality changes. One condition in particular is notable for doing so: Neurosyphilis."

Beutler explained that syphilis has been known through history as "The Great Imposter" because it mimics so many other illnesses and syndromes as it moves through its various stages of infection.

"Primary syphilis is the most widely recognized form of the disease. It is characterized by the development of an ulcer, usually genital, a few weeks to a few months after sexual contact with an infected person. If the ulcer is not noticed, or not treated, it heals on its own, and the disease enters a dormant phase. But during this time, the bacteria—a spirochete called Treponema pallidum—spreads throughout the body without causing any symptoms," he said.

Secondary syphilis develops weeks or months later and is characterized by a wide array of symptoms including fever, rash, fatigue, sores in the mouth and genitals, malaise, muscle aches and swollen glands.

If left untreated at this stage, Beutler said, "the infection enters a prolonged latent phase, which can last decades. During this time, it is asymptomatic and it is not contagious. In some cases, this is followed by a tertiary stage, which is the most serious and may involve any organ in the body. It is seen 10 to 30 years after the initial infection, and is best known for causing neurologic and neuropsychiatric disease: Neurosyphilis."

Neurosyphilis symptoms can manifest in an array of ways depending upon the patient.

"Commonly recognized symptoms include irritability, loss of ability to concentrate, delusional thinking, and grandiosity," said Beutler. "Memory, insight, and judgment can become impaired. Insomnia may occur. Visual problems may develop, including the inability of pupils to react to the light. This, along other ocular pathology, can result in photophobia, dimming of vision, and squinting. All of these things have been observed in Trump. Dementia, headaches, gait disturbances. and patchy hair loss can also be seen in later stages of syphilis."

Whether or not Pres. Trump has the disease, Beutler said, can't be established from a distance.

"There’s a great deal of information I don’t have access to, which could be critical in reaching the correct conclusion. In Trump’s case, there are many diagnostic possibilities, and we have very little background information because the slim medical summary he released was vague, unverifiable, and possibly outdated," he said.

However, part of his job is to assemble a diagnosis out of often-incomplete information.

"Part of my training is to ask the right questions to get a sense of what the problem might be and make a list of possible diagnoses that could explain the problem. This is called the 'differential diagnosis,'" he wrote. "From there, additional questions, examinations, and tests are performed that narrow down the list, usually to one unifying diagnosis."

"Given the limited information available, neurosyphilis belongs in the differential diagnosis. We know Trump was potentially exposed to syphilis based on his own statements that he was sexually promiscuous in the 1980s, a period when syphilis cases were rapidly increasing in the U.S.," Beutler said, pointing to a Howard Stern interview with Trump from 1997 in which the former reality TV star said:

“I’ve been so lucky in terms of that whole world. It is a dangerous world out there -- it’s scary, like Vietnam. Sort of like the Vietnam era. It is my personal Vietnam. I feel like a great and very brave solider.”

Two simple blood tests would clear up the question, Beutler said. If they're both negative, Trump doesn't have neurosyphilis. If one is negative and one is positive, then further tests including a spinal tap are in order.

"The importance -- both to Trump and the nation -- of establishing or ruling out this diagnosis cannot be overstated, because this infection is treatable," concluded Beutler. "Without treatment, however, the disease is progressive: It can make for a rather ugly end to one’s life. Whether Trump emerged unscathed from his 'personal Vietnam' is now a question that he should explore with his personal physician."