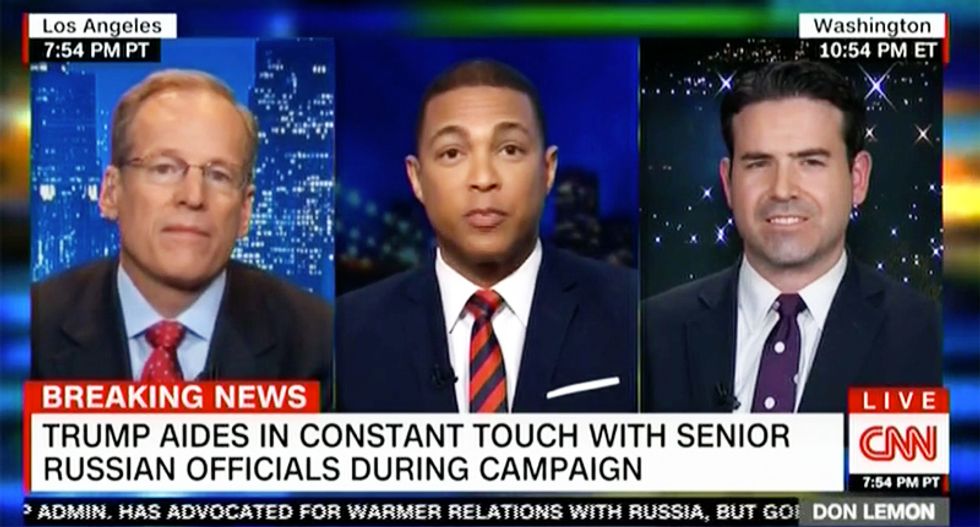 Former Congressman Jack Kingston (R-GA) got a lesson in reality from CNN host Don Lemon Tuesday after he attempted to dismiss U.S. intelligence reports that former National Security Adviser Mike Flynn had been communicating with Russia in possible violation of the Logan Act.

Tuesday the White House went into damage control over the Flynn's Monday night resignation, only to be faced with another crisis when the New York Times released a bombshell report stating Flynn was not the only person associated with the Trump campaign to be in contact with the Russians before Trump was sworn in.

Speaking with Lemon, the former Georgia lawmaker first criticized those who have called for an investigation into Flynn's contacts, saying they were,"Not helping our national security picture right now."

Kingston, who has his own ties to Russia, then tried a new approach, saying Flynn was the real victim because U.S. intelligence agencies were listening in on him illegally.

According to Kingston, the accusations against Flynn are suspect because no details have been released.

"Well, we don't know exactly what he said if he did violate the Logan Act," Kingston offered. "But what we do know is that he was spied on by American security agencies and that's against the law."

"How does an American intelligence agency spy on a private citizen and then leak the --"Kingston continued, before Lemon cut him off.

"This is what you have wrong about that, Jack," Lemon explained. "These were routine interception surveillance and it wasn't on a private citizen, but with people who were in private contact with Russians. For some reason, this guy was an ambassador to Russia. All the ambassadors to Russia's calls have the possibility of being intercepted."

"This was a routine interception," the CNN host continued. "They were not looking for anything that the general was doing. They were monitoring a Russian ambassador. This wasn't anything where they were trying catch General Flynn."

"So I think you have that part of it wrong," Lemon concluded.