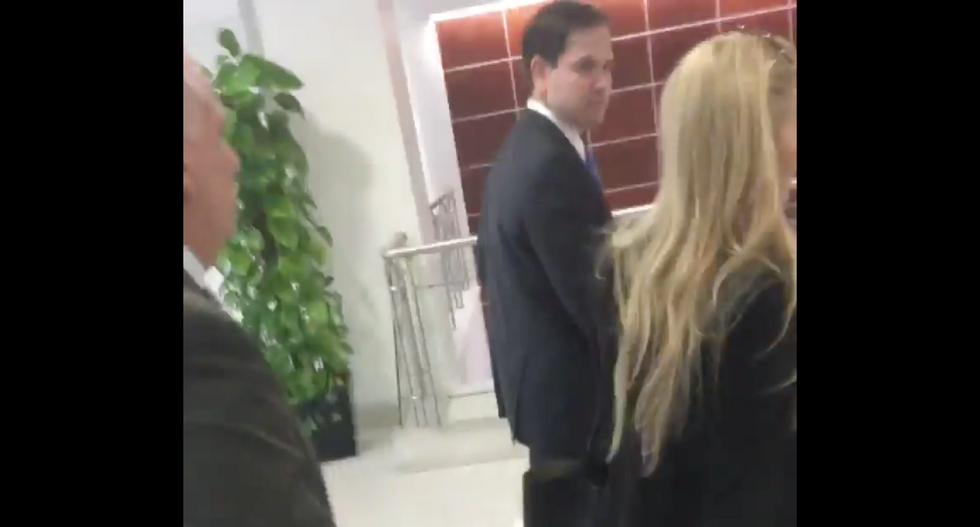 Sen. Marco Rubio (R-FL) on Thursday dashed away from a constituent requesting the Republican senator attend a town hall meeting.

The video, posted by Service Employees International Union-Florida (SEIU-FL) community organizer Thomas Kennedy, shows Rubio avoiding the camera and questions as he makes his way through a University Park building.

“Senator, I thought you were in Europe,” Kennedy said in the video, referring to Rubio’s Feb. 21 statement indicating he’s “traveling overseas this week” and will thus be unable to attend any meetings in his state.

Indivisible Movement, a large anti-Donald Trump group commonly referred to as the left-wing Tea Party, organized a town hall for Rubio—but the Republican senator declined the invitation. A spokesperson for Rubio’s office said the organizers were “deceiving people” by advertising his attendance.

Rubio's press secretary Matt Wolking told the Orlando Weekly the senator will not attend the town hall because activists were using the meeting "to stage a hostile atmosphere, record themselves booing no matter what is said, and refuse to give up the microphone."

In the video, Rubio failed to comment on his refusal to face the constituents he purports to represent, simply saying, “Good to see you man.”

A spokesperson for Rubio pushed back on the fliers, blaming them on “a strategy outlined in an online activist manual” created by Indivisible Movement.

“Anyone who claims they can’t get in touch with Senator Rubio’s office is being dishonest,” the spokesperson said. “Our Tampa office only has two employees and serves multiple counties, yet they have met with dozens of these liberal activists.”

Rubio is not the only Republican Congressman facing criticism from his constituents. At town halls across the country, voters have begun flooding their leaders with questions pertaining to the Affordable Care Act, immigration and civil rights, among other issues. While some Republicans have attempted to dismiss the angry constituents as “paid protestors,” reports indicate these crowds are very much local citizens fighting for their beliefs.

Notably, a woman at Sen. Tom Cotton’s (R-AR) town hall Wednesday night received a standing ovation when she declared at the beginning of her question, “I am not a paid protestor.”

Sen. @marcorubio has been missing! His office said he was in Europe but we found him. We asked him to host a town-hall but got no answers. pic.twitter.com/2mn9oxLXJd