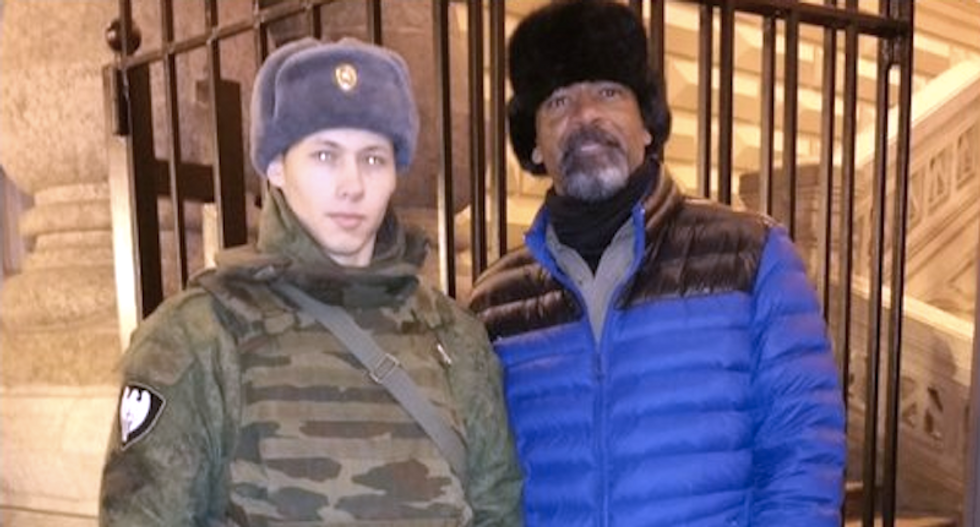 The National Rifle Association -- one of Donald Trump's strongest campaign backers -- sent a delegation to Moscow in late 2015 to meet with a Vladimir Putin deputy who believes Alaska rightfully belongs to Russia.

Meeting with Dmitry Rogozin -- head of Russia's defense industry and a target of U.S. sanctions since Russia annexed Crimea in 2014 -- would not have been illegal, as long as no business was conducted, but does raise new questions about Team Trump's ties to the Kremlin, reported The Daily Beast.

The meeting, which had not been previously reported in American media, has raised eyebrows among House Intelligence Committee members investigating the alleged links between the Trump campaign and Russian officials.

“Russia is not America’s friend, and it’s stunning to hear that while they were attacking our democracy, one of the largest organizations supporting Trump was cozying up with a sanctioned Russian in Moscow,” said Rep. Eric Swalwell (D-CA), who serves on the House panel that oversees the CIA.

The NRA had previously objected to U.S. sanctions that blocked the import of Russian-made guns, but David Keene -- the former NRA president and current board member -- insisted those sanctions never came up during the trip to Moscow.

“Rogozin is chairman of the Russian Shooting Federation and his Board hosted a tour of Federation HQ for us while we were there,” Keene told The Daily Beast. “It was non-political. There were at least 30 in attendance and our interaction consisted of thanking him and his Board for the tour.”

“It is disconcerting that they would be meeting [with a Russian official] about anything given their vocal support of the president,” Quigley said. “Due to the NRA’s opposition to sanctions, it defies credulity that they wouldn’t have discussed sanctions and their extraordinary support for Donald Trump’s campaign.”

The delegates mostly refused to tell The Daily Beast who paid for their trip, but one of them -- Milwaukee County Sheriff David Clarke, a Fox News favorite and Trump supporter -- was required to file public disclosure forms for his visit to Russia.

Clarke's disclosure forms reported the December 2015 trip -- which coincided with an anniversary event for RT attended by retired Lt. Gen. Michael Flynn and Green Party presidential candidate Jill Stein -- was partially paid for by a Russian group called The Right To Bear Arms.

The Daily Beast has previously reported on that group, which is led by Maria Butina -- a former central Russian bank staffer and furniture store owner in Siberia who came to the U.S. last year as a graduate student.

Butian started a business in the U.S. with Republican activist Paul Erickson and once worked as a special assistant to Alexander Torshin, a Putin associate and former Russia legislator accused by Spanish investigators of helping mobsters launder money.

She and Erickson attended the invitation-only Freedom Ball after Trump’s inauguration, The Daily Beast reported, and classmates at American University and other acquaintances say she boasts that she was part of the Trump campaign’s communications with Russia.

Butina had been to the U.S. once before, the website reported, when she turned up in July 2015 at an early Trump rally in Las Vegas, where she asked the Republican candidate to comment on Russian sanctions.

“I’m from Russia. My question will be about foreign politics,” Butina said. “If you will be elected as president, what will be your foreign politics, especially in the relationships with my country? Do you want to continue the policy of sanctions that are damaging [to] both economies? Or [do you] have any other ideas?”