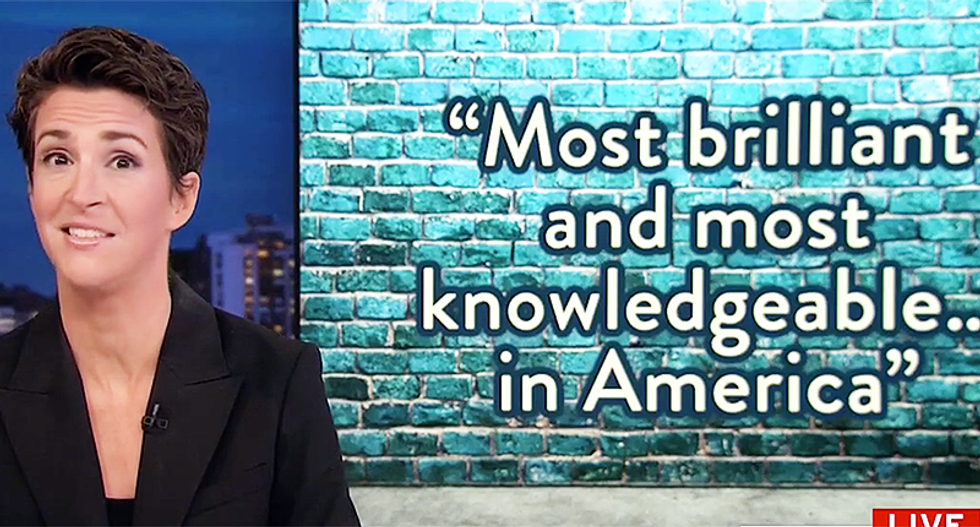 Maddow showed the document ordering special prosecutor Robert Mueller and noted that his position allows him to investigate "any other matters that might arise from the Russia investigation." One of those matters to surface has been the possible obstruction of justice by Trump for the conversation with Comey and the subsequent firing of Comey.

Mueller's spokesperson refuses to comment on whether they are investigating Trump, however, Mueller just hired a prosecutor who has experience in criminal obstruction of justice cases.

Her first reason is that under oath Thursday, Comey said it twice. The second reason Maddow gave for believing Mueller is investigating Trump is the revelation that Comey turned over all of his memos to Mueller.

"'I don't have them anymore, I gave them to the special counsel,'" Maddow quoted Comey. "So, that means any notes, any memoranda James Comey wrote about his interactions with President Trump, he has handed them over to the special counsel, Robert Mueller. And that's a simple thing, but it has a couple of really important implications. The first of which is that may be what's complicating the issue of this poor law professor and the difficult time he's having tonight."

Maddow was referencing the Columbia law professor that Comey had leak one of the memos to reporters.

"The fact Bob Mueller has these documents, that may be the complicating factor as to whether or not Jim Comey's friend, this law professor, can hand over his copy of the memo to the Senate," Maddow explained. "That may be what's making this a hard night for that law professor. But the fact James Comey gave his memos about his conversations to the special counsel that implies pretty strongly they are investigating potential obstruction of justice by the approximate president."

Maddow recalled that Trump never said to Comey about the Russian attack. Trump had little no concern or fears about our country's electoral system being attacked by a foreign entity.

"The president never brought that attack up, never expressed any concern about that Russian attack to him ever, even once," Maddow continued. "So Bob Mueller's only investigating the Russian attack and possible Trump campaign involvement in the Russia attack. These memos aren't about the Russia attack. If that's all he's investigating there's no reason for him to be reviewing James Comey's memos about his interactions with President Trump."

But Mueller is and he wanted the memos.

"The only reason they would need those memos is if he's investigating the possibility of something else besides the Russian attack," Maddow clarified.

Watch her further explanation below: