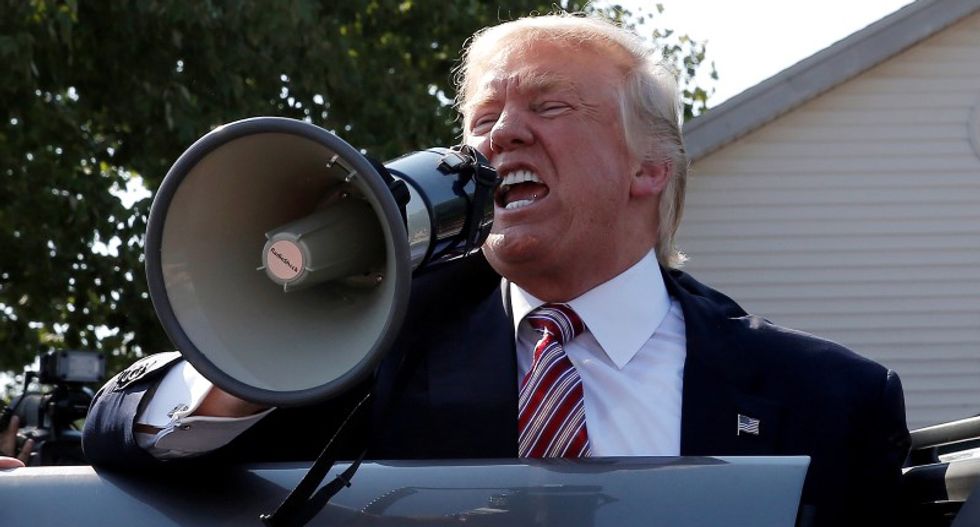 The animation, which was taken from Trump's appearance at a WWE professional wrestling event, was apparently created by an "obviously racist" Reddit user called "HanAssholeSolo."

The reporter who revealed the meme's creator said he has been deluged with anti-Semitic death threats from Nazi sympathizers who support Trump.

As a presidential candidate, in February 2016, Trump retweeted and then deleted a message from the Twitter user WhiteGenocideTM complimenting the size of his rally crowds.

That user's profile shows an image of George Lincoln Rockwell, founder of the American Nazi Party, and links to anti-Semitic, Holocaust denial and racist content.

Trump actually retweeted another post by WhiteGenocideTM a few weeks earlier, when he shared an image showing Jeb Bush's head superimposed on a panhandler's body, holding a sign that reads, "Vote Trump."

He tweeted an image in July 2016 calling Hillary Clinton "crooked," next to a six-pointed star that closely resembled the Star of David -- which emerged from a neo-Nazi forum on the 8chan website.

House Speaker Paul Ryan denounced the tweet as anti-Semitic, but Trump's social media director Dan Scavino claimed he randomly chose the star from a stock art collection on Microsoft Word, while Trump insisted the graphic was a sheriff's badge.

He retweeted the user @NeilTurner_ -- whose Twitter bio claims "white genocide is real" -- five times during the campaign, despite following only 42 accounts at the time.

Fortune's analysis found "Trump and his campaign have used social media to court support within the white supremacist community, whether intentionally or unintentionally. And it appears to have worked."

Kellyanne Conway, who served as Trump's campaign manager during the final stretch before the election and now serves as a senior White House adviser, tweeted "love you back" in February to an account called Lib Hypocrisy -- whose bio includes the hashtags #WhiteIdentity, #Nationalist, and #SteveBannon.

He's also shared posts using the "Pepe the Frog" character identified with the neo-Nazi "alt-right" movement, and he cracked a "gas chamber" joke in September 2016.

The analogy, which has been used on message boards and shared as social media memes, originally used M&Ms as the candy in question — but that changed after George Zimmerman gunned down Trayvon Martin while the unarmed black teen was walking home from buying a drink and some Skittles.

But the poisoned candy analogy goes back even further, to an anti-Semitic children’s book published by Julius Streicher, the publisher of the Nazi newspaper Der Stürmer who was executed in 1946 as a war criminal.

The book tells the tale of “the poisonous mushroom,” and was used to indoctrinate children in hate.