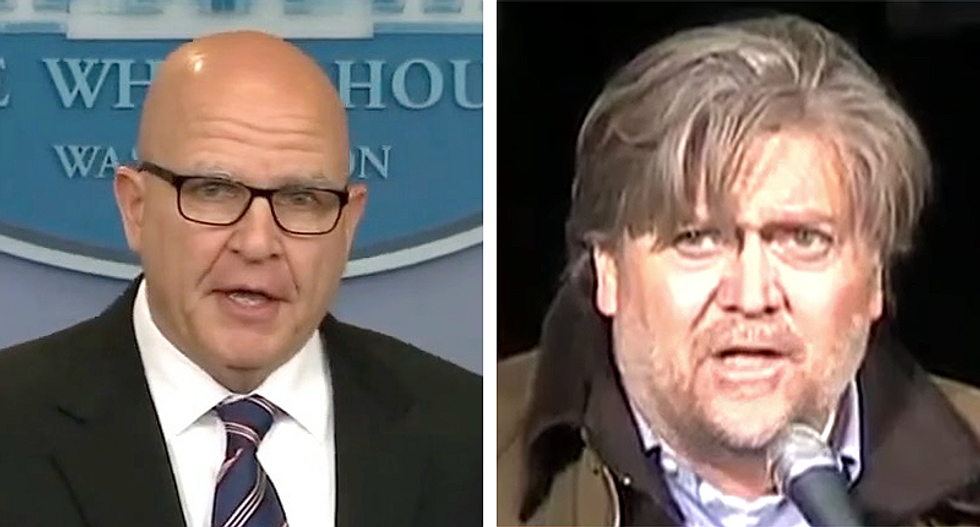 While senior White House aide Steve Bannon might have been removed from the top position on the National Security Council, it seems he's still calling the shots. At the same time, foreign policy decisions seem to be evaluated on the impact it will have on the Trump brand, not on the United States.

The Washington Post explained that President Donald Trump and new national security adviser, Lt. Gen. H.R. McMaster, are in conflict over Trump's desire to "win" Afghanistan. The three-star general addressed Trump's questions about why the U.S. isn't "winning" in Afghanistan, but didn't want to discuss why we're still there after 16 years.

Trump can't decide on a new strategy because he wants to win but also doesn't want to spend more money. The two are in conflict with promises he made during the 2016 election. McMaster's job is to develop the strategy of doing more with less, a near impossibility. Trump doesn't seem interested in consensus from the generals or key security officials. Instead he's impatient and more interested in shaking up foreign policy, The Post reported.

McMaster seems more interested in the impact the decisions will have on the United States, where Trump's focus has been more on how the plans will fit in with his 2016 promises. Thus, McMaster has yet to earn Trump's trust in running the NSC as he sees fit.

One senior administration official thinks the only reason McMaster is still there is that Trump is constantly being celebrated for having the general on board. “Senators and the people the president talks to say, ‘We love H.R.,’” the official told The Post. “The president is very proud of him.”

The biggest problem McMaster faces is going up against Bannon, who sees Trump as a revolutionary official who will change the world after a cataclysmic event that ushers in the "fourth turning." His allies bashed both Bannon and his “protege” Sebastian Gorka for trying to diminish McMaster’s control over the NSC.

Reports revealed that Trump was angry that top aide Steve Bannon slipped his nomination to the National Security Council into an executive order without explaining it to him. Trump proudly signed the order as part of his first several months of what he bragged was "passing legislation."

At the time, McMaster, was the one responsible for making the decision to boot Bannon and Trump agreed after watching Bannon's profile explode in the media.

While Bannon was demoted, he still remains on the council, and until recently, one of his right-wing moles did too.

"Bannon and Gorka have recently become a more regular and outspoken presence at meetings led by McMaster and his team on Afghanistan, the Middle East and the administration’s national security strategy," The Post reported.

“H.R. is indispensable in helping the president hear all those viewpoints and have the information he needs," said the senator, who is close to McMaster.

The infighting has resulted in more problems than solutions.

“He had not worked in D.C. before, so this was certainly a new environment for him, but I have always seen him lead,” UN Ambassador Nikki Haley said. “He sets very clear goals. . . . When we’re in those meetings, he’s all about getting options on the table for the president.”

When McMaster took over, he was forced to make friends with the aides like Bannon and Gorka first, before trying to win over Trump. Another major task was in keeping Trump's attention during security briefings.

“We moved very quickly from news to intelligence to policy with very little clarity on which lanes we were in,” one U.S. official present during the briefings explained. “McMaster would act like the tangents didn’t happen and go back to Point 2 on his card.”

One Trump confidant explained that Trump has the attention span for about half a page.