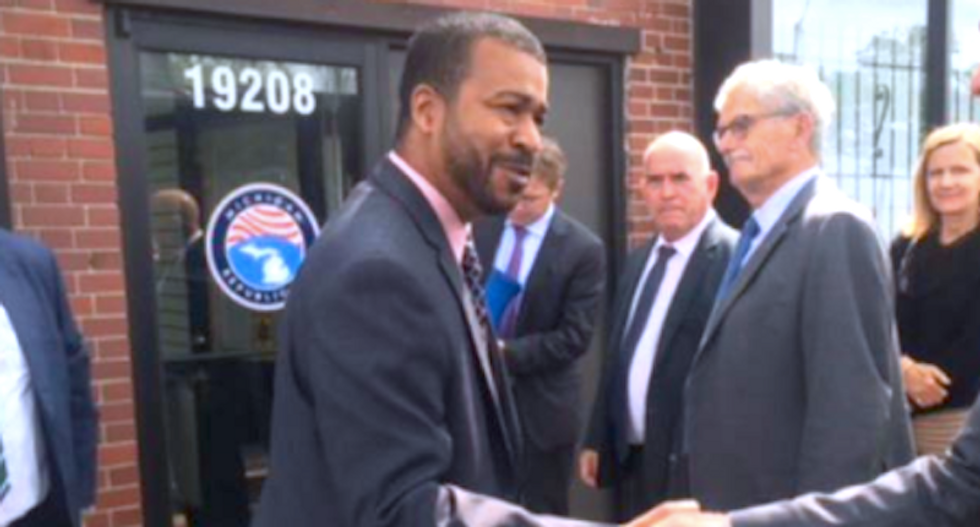 A black Republican Party official infuriated his fellow conservatives by calling out racism in the "Party of Lincoln."

Wayne Bradley is director of African-American engagement for the Michigan GOP, where he tried to attract black voters in Detroit -- which typically gives more than 95 percent of its vote to Democrats, reported the Detroit Free Press.

To reach out to voters, Bradley routinely expresses his thoughts on Facebook about news events -- including the white supremacist rally in Charlottesville and President Donald Trump's controversial pardon of racist former sheriff Joe Arpaio.

“You can’t claim to be from the Party of Lincoln and defend the confederacy,” Bradley said in one post -- and his fellow Republicans were outraged.

Republican social media users called for Bradley to be fired from the job he's held for three years, the Free Press reported.

A state GOP spokesperson said Bradley's posts reflected his own views, but Pannebecker -- who helped organize a Trump rally in Macomb County the weekend before the election -- said the posts appealed to the wrong kind of voter.

"That hasn’t been very effective, just hanging out with the fellas," Pannebecker said. "People I saw on his Facebook page aren’t in any way Republicans."

Another Facebook user, Tim Kuhn, wondered if Bradley was calling for the destruction of the Lincoln Memorial in Washington, D.C., while an anti-LGBT and anti-immigrant former state lawmaker accused the GOP official of promoting racism.

“Any GOP office holder who holds the views Bradley does should not be in GOP leadership or paid positions in the GOP," said Dave Agema, who was pressured to quit the RNC after sharing a post from a white nationalist website. "He foments racism when he is supposed to be calming the waters. Disrespect for the flag and the president are not attributes I respect or expect from him nor the position he holds. He doesn't do his job well and, in my opinion, is yet another RINO (Republican In Name Only)."

Bradley said he has no plans to quit, and he still supports the GOP president.

Bradley said he has the party's backing for now, but one local political consultant said the outrage over his social media posts puts the GOP in an awkward position.

“The biggest mistake the Republican Party can make is to eliminate him," said Mario Morrow, of Detroit, who has worked for both Democratic and Republican governors. "The majority of the small number of the African-Americans in the party would abandon ship. But if I had any advice for Mr. Bradley, it would be to keep your resume dusted off.”