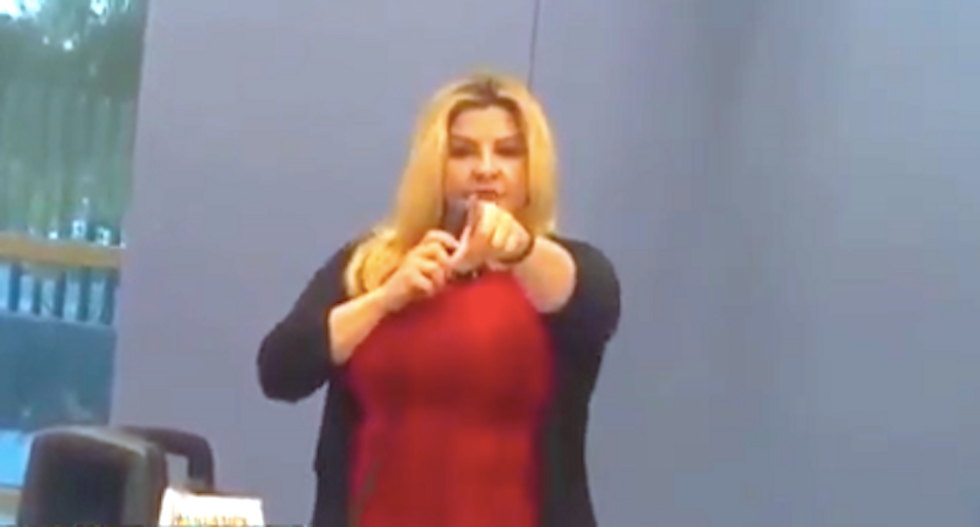 A Las Vegas city councilwoman had critics thrown out of a homeowners association meeting after her actions were questioned.

The meeting was called Thursday to discuss the future of Pop Squires Park, which may be sold by the homeowners association for development as an apartment complex, and residents who enjoy the public park turned out to ask questions, reported KTNV-TV.

City Councilwoman Michele Fiore, a Republican former state lawmaker and supporter of scofflaw rancher Cliven Bundy, made clear beforehand the meeting was intended for HOA members only -- but concerned residents showed up anyway.

Some participants said Fiore was hostile from the start, complaining that her staff was treated poorly at a previous meeting, and she threatened to remove anyone she deemed as disruptive.

Fiore quickly ordered city marshals to remove someone who asked her a question about the sale, and a disabled veteran who lives nearby decided to start recording video on his phone.

That set off Fiore, who is shown on video pointing at the former police officer and demanding to know where he lives.

Randall McGlade told the city councilwoman he lived "in the general area" -- and Fiore ordered marshals to remove him, too.

"Marshals, please," she said. "This is for a neighborhood meeting ... That's very rude what you're doing."

A city marshal somewhat reluctantly told McGlade he had to get up, and then told the former officer Fiore had "every right" to kick him out after he argued with the councilwoman.

"They were basically acting like Fiore's personal Gestapo," McGlade said, referring to the Nazi secret police.

Several attendees contacted the TV station to complain about the elected official's behavior, but Fiore defended her actions.

Fiore insisted she wanted to save the park, and she suggested holding a public meeting there to discuss the proposed sale.

"Let's have a barbecue at the park, and my city council members, staff and everything, we'll bring the beer and hot dogs."

Fiore has a history of reacting angrily to public criticism.

After an assemblyman raised concerns about a bill she introduced, Fiore lashed out and said, "Could you just sit your ass down and be quiet?"

She was also involved in ending the lengthy standoff last year at an Oregon wildlife preserve, which Bundy's sons occupied with other armed militants to protest federal laws on public lands.