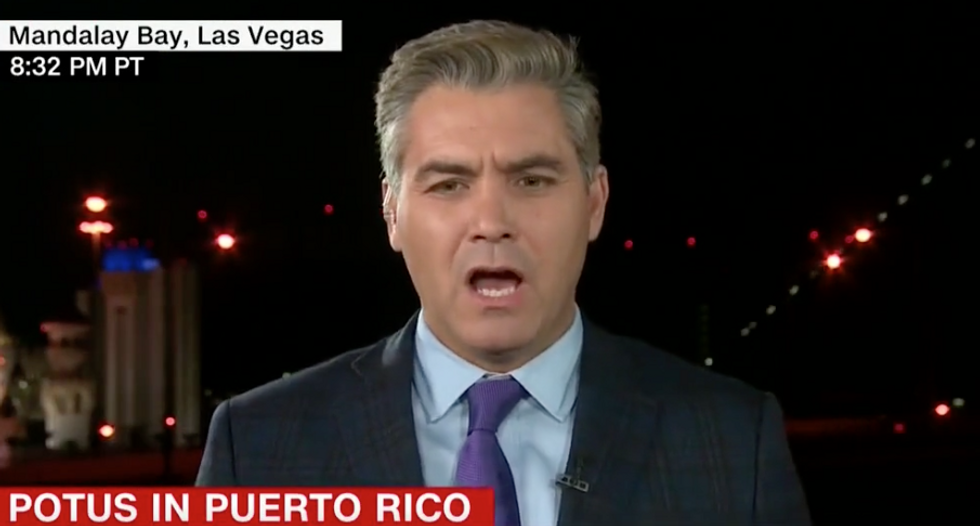 “It seems when the teleprompter is off, often the wheels come off, and we saw that happen earlier today in Puerto Rico,” Acosta told host Don Lemon. The CNN reporter pointed to Trump’s comparison of the death toll from Hurricane Maria with death tolls from prior catastrophes.

“You don't compare one tragedy to another when you're President of the United States," Acosta explained. "You're there, on the ground, to be consoler-in-chief.”

The reporter also noted Trump berated Puerto Rico for “throwing the budget out of whack” during a press conference on Tuesday, a statement Acosta said is “not what people on the ground during a natural disaster want to hear.”

Lemon then played a clip of Trump tossing rolls of paper towels into a crowd gathered to greet him at a hurricane relief center, prompting Acosta to argue the president's behavior was way off-base.

“Can you imagine if we were covering President Barack Obama visiting a hurricane zone, an area devastated by a hurricane, and Barack Obama had been throwing rolls of paper towels at hurricane victims?” Acosta asked. “To me, it's almost like we've lost our sense of what is purely outrageous coming from this president anymore.”

“That's just a strange and un-presidential thing to do, to be throwing rolls of paper towels at people,” Acosta continued. “And yet you hear the president make these comments all day long.”

Earlier in the interview, Acosta criticized the Trump administration for its oft-repeated line that “now is not the time” to discuss gun control, even after a gunman on Sunday carried out the deadliest mass shooting in modern U.S. history.

“Earlier today we did receive word from a Republican source close to the White House that the White House has been issuing these talking points to its surrogates, essentially urging those surrogates to go out and say, ‘now is not the time to talk about gun control,' that 'we have to wait for the facts to come in,’” Acosta explained. “But the facts are in. We've had these mass shootings over and over and over again and the members of Congress up on Capitol Hill have simply done nothing about it.”

“Members of Congress, lawmakers are doing nothing about it,” Acosta later repeated.