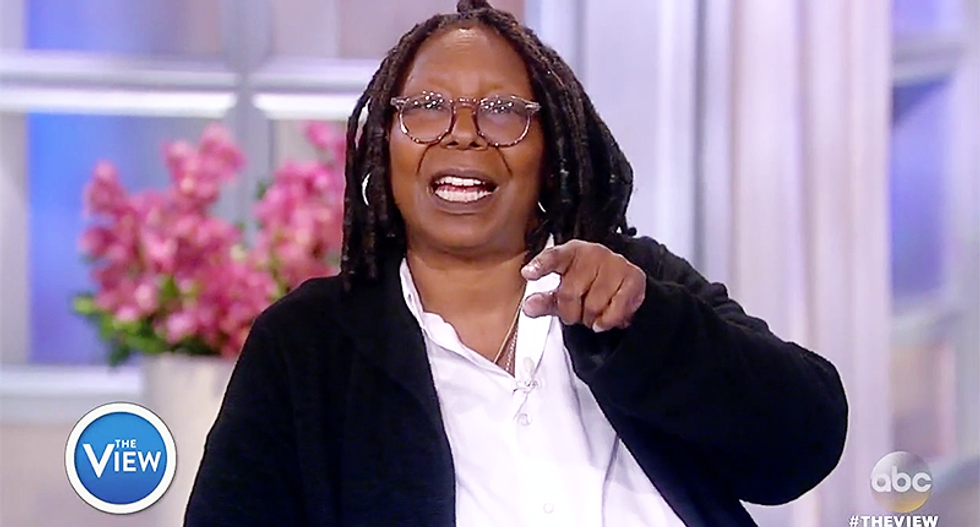 The co-hosts of "The View" were shocked by President Donald Trump's visit to Puerto Rico on Tuesday.

The White House has said that Trump was trying to "put a positive spin on things" and that statements that seemed callous or self-aggrandizing were really just jokes. The co-hosts weren't having it. Whoopi Goldberg noted that the visit took place two weeks after Hurricane Maria made landfall on the U.S. island.

Using her valley-girl accent, Goldberg said, "putting all of our personal feelings about the guy aside," she wanted to know how her colleagues interpreted Trump's visit and the job he and his government is doing responding to the catastrophe.

"You know, all I can say is Rex Tillerson, his own Secretary of State called him a moron," said Behar, citing an NBC report both Tillerson and Trump deny. "Do you remember, even Nixon and Kissinger knelt down to pray together. Baker saved George Bush's presidency. This guy is calling the president a moron; this is what we're dealing with."

Sara Haines said that she wants to see a president show up and "do a lot of hugging" during times of crisis and difficulty. "Letting people know help is on the way," she continued. "Letting people know we support you. A lot of listening. People feel like they're not being heard especially on an island like Puerto Rico, who feels like they aren't getting what they need. That's all you've got to do."

"You mean you probably shouldn't have thrown paper towels in the room?" Sunny Hostin cut in, referring to Trump tossing out rolls of paper towels to crowds of desperate citizens.

Behar noted that moment interested her the most. "Did he think the paper towels was to sop up the flood?"

Hostin said that it offended her. "Are we animals?"

"You're looking at people devastated, who can't find water, can't find food, and you're throwing basic needs at them?" Haines agreed. "Even comparing the devastation of lives lost. When you're turning to someone and look at this [island] -- they don't even know what the future will look like. They don't even know how they'll rebuild. And you say, 'What's the death toll?' Like, you don't use deaths as a talking point."

Hostin explained that FEMA has updated the death toll to 34 people, when it was previously 16 in the immediate aftermath.

"That means all those additional deaths were preventable," she continued. "And what I listen to is, someone I trust, like Sanjay Gupta. Sanjay and I worked together at CNN. What he reported yesterday is that people are dying. And the question is, was aid received soon enough. He also said many of the most vulnerable citizens are at risk, mostly due to a failure of timely coordinated response by authorities. And, so, that falls, in my view, squarely on President Trump's shoulders."

Hostin went on to say that all of the hospitals and army bases aren't "up" as some of the administration officials have claimed and people died in the ICU. "All the patients died," Hostin said. "Every single patient died because there was no power."

"You know, he's not a fan of his coverage, his reviews for today. He said 'good day in Puerto Rico yesterday. While some of the news coverage is fake, most show great warmth and friendship,'" Goldberg said reading Trump's tweet. "Sir, it's on tape. You're being criticized because what they're seeing. They're not making it up. You're not a cartoon! That's you throwing towels to people and saying dumb stuff. It's a little island, man. The worst hurricane anyone has seen come through there and devastated it. Yeah, Katrina was devastating, but you also had a land mass. An island you can't go -- you're surrounded, man. Come on. Don't do that."

'The View' women school Trump after Puerto Rico... by sarahburris