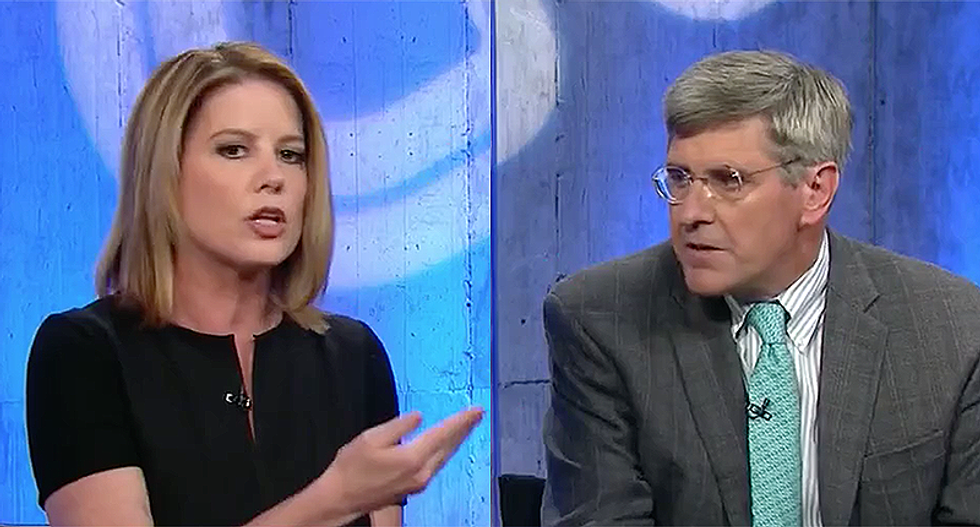 The shocking exchange came during a discussion about the culture of sexual harassment at Fox News, and Bill O'Reilly's $32 million settlement that prompted him to be "mad at God." Moore explained that a top 20 CEO of a Fortune 100 company put the onus on women to simply stay away from being alone with men as a means of preventing rape and sexual harassment. The argument is a frequent one used to excuse "boys will be boys" behavior and claim that men are too savage to control themselves in a room with a woman.

"This is very good advice," Moore said. "He said, 'I would never have a meeting with a woman without someone else in the room.' And this is, unfortunately, this is where we're at today. If you are in a position of power, a Bill O'Reilly, a Donald Trump, anyone who is running a company, you cannot be in a room, you just can't."

"Anderson Cooper has never been accused of . What are you talking about?" she cut in.

"I'm saying that --" Moore began before being cut off again.

"So any powerful man cannot be alone with a woman? That's ridiculous," she said. "I have meetings with Jeff Zucker alone all the time, I don't have any problems, like what? This would affect women negatively that you can't even meet privately with your boss?"

"If you're in a position of power it's probably not a good idea," Moore tried to claim.

Powers named Tucker Carlson, who has also never been sued for sexual harassment. She said simply that she doesn't understand the preposterous argument. An aghast Cooper cut in to explain that it implies something about women being legal predators.

"I mean look at all of the powerful men at Fox News who have never been accused of sexual harassment and this is your solution?" Powers said, floored.

Moore said that it was.

Commentator Matt Lewis explained that it seemed like the New York office of Fox News was where much of the sexual harassment propagated. While there haven’t been any women willing to go on the record about their experience, it certainly extended to the Washington, D.C. office.